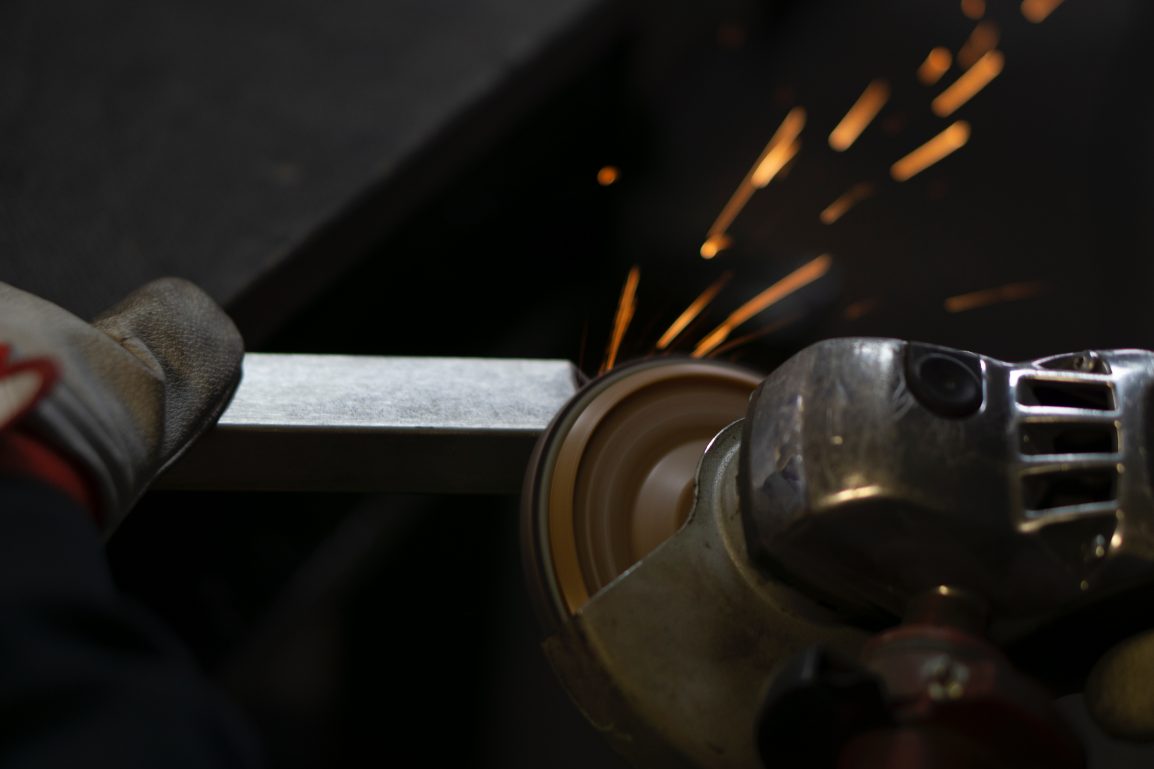 There are a lot of benefits to our high-tech, digital world, but there’s a cost associated with it too: We’ve lost our connection to the process of creating art, honing a craft and utilizing old-world techniques.

With so much time being spent in front of screens, many people are developing an urge to push back from the desk, look away from the phone and create something with their hands. In creating works of art, troubles often become distant and artists are often flooded with a sense of power and accomplishment.

For many folks, there is a need to release pent-up stress and fall into a creative flow or zen-like state. For them, an active, intense and hardcore craft often fits the bill.

Picture a fiery orange forge blazing with intense force and heat. Next picture an anvil, chunks and sheets of metal and a range of hammers and aggressive looking cutting tools. Now picture large sheets of tin that are snipped and folded cold then soldered into kettles, trays and lanterns.

Finally, picture who’s working with these intense materials and tools: more and more, it’s women. They are finding their creative calling as blacksmiths, bladesmiths, metalsmiths, tinsmiths and sculptors. They fall into a rhythm and find satisfaction and pride in creating something out of nothing.

Learning the Tricks Behind the Trade 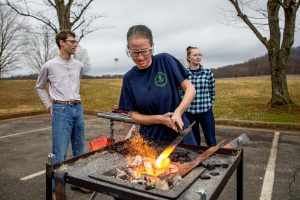 Michelle Gervasio, adjunct professor of engineering at Sweet Briar, picked up on the growing trend of women getting into metalsmithing. Its principles, techniques and underlying chemistry fit neatly into her engineering curriculum.

In spring 2019, Michelle taught materials science and engineering. She assigned a research paper where students had to select a simple tool or object and determine the best material that would meet the object’s performance requirements while also optimizing around things like cost, difficulty of fabrication and the ethical and environmental implications of that material choice.

“Several students wrote their papers on blades such as swords and survival knives,” said Michelle. “Their enthusiasm was so great that I told them about the TMS Bladesmithing Competition organized by The Minerals, Metals and Materials Society.” The competition will be held in February 2021. Entrants must present their blade and a 10-page technical report. What sets Sweet Briar metalsmith students apart is the fact that they only work with hand tools, a coal forge and 3-lb hammers. No fancy tools or power machinery in sight. They don’t need it. More than that: they built their own coal forge, too.

Word spread about the competition and there was such a large number of students interested in participating, that Michelle decided to offer a course dedicated to metallurgical techniques: Practical Metallurgy. Sure enough, the class is full with a waitlist.

“I’m excited to teach them the science that goes into forging and blacksmithing because I think a lot of people don’t recognize the technical rigor behind the techniques and view it as a craft or hobby,” says Michelle. “Metallurgy is a large discipline within materials science and the academic rabbit hole goes just as deep as any other subject. Of course, the students will also get a chance to have some fun putting hammer to steel in a series of hands-on projects.”

Of course, the students are also tapping into the contemporary desire for old-world creativity. They’re energized by learning the methods behind the process. In fact, the two students who wrote papers on swords and survival knives—Lizzie Martin ’22 and Rose Murphy ’22—are so interested in it that they’re going to do summer research leading up to the bladesmithing competition.

And, because steel is such a prominent structural material, a great number of engineering jobs are related to the study of metallurgy.

With the expertise they’re learning at Sweet Briar, students can go on to work in many fields such as conducting research in the aerospace industry and managing operations to cut down production costs. 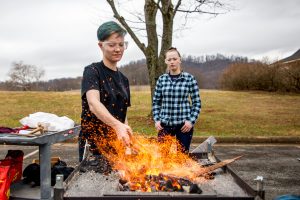 Erin Bell Nelson ’23 discovered her love of blacksmithing through her grandfather who is a welder. Growing up, she worked with him and his team at the shop, and he gave her a set of extra small welding gloves, which are difficult to find. Seeing the large machines and learning how they can make something out of nothing was fascinating. Erin’s mother connected her with someone who had open workshops on welding and blacksmithing, and she ran with it.

“I enjoy working with fire, metal, all of it,” says Erin. “In high school, I combined my senior project with my Girl Scout Gold Award project for blacksmithing and welding. I made metals sculptures of birds, frogs and tulips. I also held workshops for other Girls Scouts and really enjoyed teaching girls because it was such a male-dominated field.”

In her work, Erin uses a lot of silverware. It’s plentiful and inexpensive to pick up at a local thrift store, and it has a low melting point, which makes it simultaneously easy and challenging to work with. She also used a variety of metals, and there is one particular piece of which she’s especially proud: a beautifully shaped feather that appears weightless. To make the piece, Erin used a forge, banged out the shape with a hammer, used a plasma cutter to get precise cuts, created details with a grinder and smoothed the edges with a band saw.

Erin will be taking Michelle’s metallurgy course where she can learn more about what’s behind the process of melting metals to create something entirely different. She is interested in geothermal engineering and sees how welding is present throughout all facets of the field—including mechanical, environmental and electrical—but she also loves the artistry and basic craftsmanship.

“Everyone should know how to do old-world techniques,” she says. “I want to solve the mystery of how Damascus steel is made by replicating the technique of linking metal hexagons, which is used to make shields and swords.” 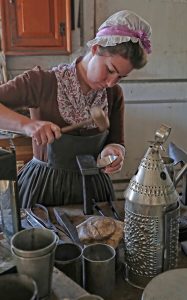 Not too many people can put apprentice tinsmith in their email signature, but Jenny Lynn ’06 can. For the past five years, she has worked in the tin shop at Colonial Williamsburg.

When Jenny started at the 18th century living history museum, she floated between the trade shops: woodworking one day, sewing the next. When the tin shop opened up in 2013, and they taught her the trade, she fell in love.

Jenny grew up in a sailboat shop and regularly worked with wood, fiberglass and some metal. “I’ve always loved working with my hands, using specialized tools and making stuff very quickly,” says Jenny.

After graduating with a degree in history, a minor in art history and an arts management certificate, Jenny became a museum educator at a lighthouse in Florida, then worked at the Henricus Historical Park, a 17th century living history museum outside of Richmond. Then, at a Civil War reenactment, she ran into a woman she recognized from a PBS series who told her about Colonial Williamsburg needing apprentices.

“This was a perfect fit for me,” says Jenny. “I didn’t want to only give tours, I wanted to show people how to make things hands-on, the 18th century way.” 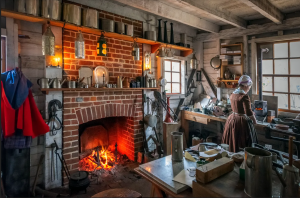 Jenny is now in her 3rd level apprenticeship in the tin shop, which means she’s halfway through. It is the only tin shop doing 18th century work in the country and they are still figuring out how a lot of the tin pieces were made. Each trade shop has its own apprenticeship program so that the trade can be passed on to new employees. With each level, you learn skills. There are only ever three people in tin shop: the master tinsmith, the journeyman and the apprentice.

Jenny’s primary job in the shop is public education, which she does while crafting useful items out of tin. Currently, she is stuck on coffee pots. “I make lots of cups of all sizes, cooking kettles, trays, punched lanterns, teapots, tinder boxes and wall sconces,” she says. “They are put to use around Colonial Williamsburg and in the other trade shops. Sometimes I make enough to sell in the shop. I also can take special orders for visitors, and reenactors frequently make requests as do other museum looking for authentic 18th century replicas.”

Tinsmithing is very different than other metalsmithing. Artisans take large, flat sheets of tin, cut out shapes with patterns, bend and fold them cold, and then solder them together. There is no forge work involved, but Jenny regularly works with blacksmiths and architectural experts.

“Social media is booming with makers and old-world interest,” says Jenny. “I’m always connecting with the new fans.” Jenny wants to continue her apprenticeship, become a journeyman and ultimately be the master tinsmith in charge of the shop. “I want to continue to learn and educate people about this nearly lost old-world technique. Not much is known about it,” she says. “I want a better understanding of how tin household items were made and used in the period. I want to be a groundbreaker in undertaking and presenting more research.”

We raise our tin cups and steel blades to the Sweet Briar women who are forging their own paths.

For more info on Sweet Briar check out this video and article.

College & Interning During a Pandemic