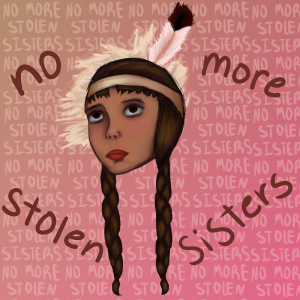 This month, the United States will celebrate Thanksgiving, a time to be grateful for our friends and family. Unfortunately for some, their friends and family are being taken from them. And it’s the very same people that are credited in helping to start this holiday.

No More Stolen Sisters is a movement intended on stopping violence against Native American women. The picture above features Pocahontas, who is often seen as the first stolen sister. The narrative of her saving John Smith is often disputed. There is also little to no evidence that incident actually occurred. What we do know is that a 10 year old Pocahontas was taken to live in England, got married, and was converted to Christianity and renamed Rebecca. She would then died a few years later.

This mistreatment of Native American women is not uncommon. Native American women are murdered over 10 times more than the national average, according to the Department of Justice. Congress has designated May 5 as National Day of Awareness for Missing and Murdered Native Women and Girls. Sadly, many people still don’t know of these tragic statistics.

I created this piece as an attempt to spread awareness of the cause. Although this doesn’t do much in the grand scheme of things, and I myself am not native and will never experience what native women go through, doing a little is better than doing nothing at all. I implore everyone to research more into the movement and to educate themselves of the struggles that Native American women are facing.