What I Would Tell My Freshman Self 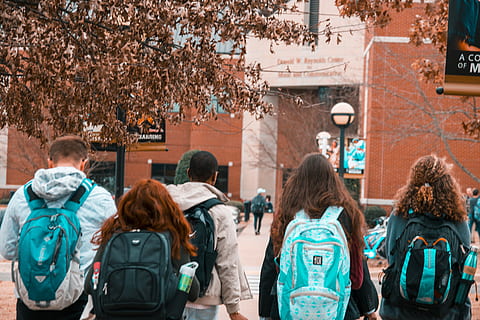 High school freshmen and seniors differ a lot in maturity level. It’s been a long journey for me in which I’ve learned a lot and grown as a person. Since I graduated last week, I have been thinking about my high school career lately- what I’m proud of, and what I feel I should have done differently.

Here are ten pieces of advice I would give my freshman self if I could. My hope is that it reaches girls starting high school in the Fall.

1. Drop the “too cool” attitude

It’s funny. I was pretty positive and “go with the flow” for most of middle school, but eighth grade came around and suddenly I felt this social pressure to refrain from participating in anything that would make me look “uncool.” It took a long time to learn that I can have way more fun with a good attitude.

2. Speak up in class

Raising my hand and asking questions in class feels easy now, but it hasn’t always been that way. Freshman year, I was afraid of being judged by my classmates for asking a dumb question. But  I’ve since learned that if you think of a question during class, chances are, someone else was also wondering the same thing. Also, when you raise your hand and give an answer, right or wrong, it shows the teacher you were paying attention to the question. If you get it right, your classmates might be impressed. If you get it wrong, it’s nothing to feel embarrassed about.

Even though I liked track practice, I was one of the slowest on the team of strong state champions girls, so I quit after freshman year. Even though I liked playing the saxophone on the field at football games, I didn’t feel like I fit in with the kids in my section so I quit band. Looking back, though, I think that the natural progression of athleticism, social skills, and attitude that comes with sticking with an activity for years would have made track and band worth it.

4. Don’t try to do everything.

A common mistake I see high school girls make is thinking they have to sign up for every activity they can in order to impress colleges or employers. I certainly made this mistake, but as I became an upperclassman, I realized the more activities I signed up for, the less attention I could give to each one. That was when I started dropping activities I cared less about. Senior year, when I was interviewed for scholarship competitions, it turned out admissions counselors were most interested in activities that 1. were unusual, (Key Club is all over America but Girlspring is one of a kind) 2. I had been in a long time, and 3. I had a special award or leadership position from that made me stand out from other members.

It may not be this way everywhere, but at my school, there seemed to be a common trap that rising juniors fell into when they registered for classes. Freshman and sophomore year, everyone pretty much took the same classes minus a couple pre-AP options.  But junior year was when the world of AP’s finally opened up. You could take seven periods of AP classes if you wanted to. There were AP core classes like chemistry and English, and also AP electives like psychology and art. I fell into this trap not because I desperately wanted to raise my GPA, but because the classes just sounded so fun! But as much as I enjoyed each class on its own, together, they had me in way over my head. I got used to always being a little behind in each class and spending entire weekends trying to catch up.

6. Have some school spirit!

Most of my friends thought pep rallies, spirit week, and football games were lame, so I would often skip these things to fit in with them. Senior year, I realized they could be fun if I had the right attitude and hung with others with the same attitude. School spirit can be really exciting, even if your team is the worst in the area.

7. Put yourself out there

Freshman year I had a crush on this boy, but instead of, um, talking to him, I just admired him from afar. Putting yourself out there is so important, not just in high school, but in life. Ask out your crush if you want a relationship. Ask your teacher for help if you’re struggling. Apply for that summer job or internship. You get over rejection, even if it feels hard at first. And new opportunities are so worth it. This skill was something I got better at over the course of my high school career. I know I wouldn’t have had all the great experiences that I did had I not had the courage to ask for them.

8. You don’t have to be friends with them to be nice to them

I don’t think this was necessarily a problem for me, but I knew a lot of girls who, in early high school, wouldn’t talk or say hi to anyone outside of their friend group if they ran into them in public, even if they had classes or an activity with them. This is one of the things kids seemed to grow out of as they became upperclassmen, so I just encourage underclassmen to relax and be open to smiling or waving at the girl you have a class with.

9. Know how to make small talk with adults

It’s unfair that you should even have to your parents’ Facebook friends every time you go out in public. With every year of high school, more adults will ask you what you plan to do with your life. Just keep it short and sweet. You probably haven’t chosen a college or a major or a gap year program or a post high school job or a branch of the military yet. Just randomly select ONE option to be THE option that you tell all adults about until you figure it out for real. Don’t feel like you have to list everything you’re thinking about. They’re just expecting a nutshell response anyway. Keep it short and simple to make your life easier.

Time is both fast and slow. Take high school one day at a time, and soon enough, you’ll be at the finish line. High school is easy for some and hard for others. People may tell you that these four years are the best years of your life; however, I sincerely hope they aren’t. I hope they just prepare you to strive for bigger goals and pursue the life you want in the future.

Acknowledging White Privilege: Stand with Those who Suffer from Your Benefit

6 Ways to Make Puberty Easier as a Young Woman