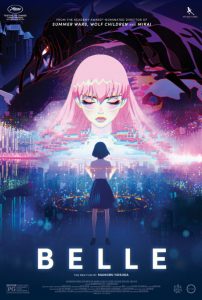 Based on the popular tale, Beauty and the Beast, BELLE invites the reader to a new online world, called U, where people receive auto-generated avatars called AS. U is a place people go to become who they really are; they’re freed from the constraints of their lives and identities in the endless world of U. Suzu Naito, our main character, creates an avatar under the name BELLE and quickly becomes the most well-known singer and most popular avatar in U. There, she can sing to her heart’s content (something she lost the ability to do in reality after a family tragedy.) One of her biggest concerts is interrupted by the Beast, an infamous user known for disrupting U and the mysterious bruises on his back. The Justices, the peacekeepers of U, take it upon themselves to catch and reveal his true identity to the 5 billion users of U. In an attempt to be the first to understand him, Suzu embarks on her own investigation and finds his secret castle with the help of an AI called Angel. After discovering his identity and dark secret, she does everything in her power to help and protect him.

Belle herself has fantastic character development throughout the film. Fueled by the desire to help the Beast and with the help of a childhood friend, she conquers the fears that have plagued her since her mother’s death and rekindles her relationship with her father and friends. The Beast, after experiencing the terrible hardships of his life, is emboldened by Suzu’s bravery and decides to take a stand against the abusive forces in his life. He gains the confidence to protect himself and his younger brother.

In the beginning, the plot is fast-paced with masterfully done quick cut montages and a load of exposition. After Suzu meets the beast, the pace slows to explore his character and Suzu’s outside life. The mystery of his bruises that actively multiply throughout the movie becomes a big theme. It’s also around this time that the Justices close in on the Beast’s castle. Upon discovering the answer to the mystery, the movie comes to a head as Suzu takes a leap of faith for the Beast’s sake. I won’t reveal much of the end because it’s such a crucial part of the movie.

I’ve been waiting for this movie to come out since mid-2021 when the first trailer came out; it was finally released in the US in January of 2022. Studio Chizu has always made brilliant, tear-jerker films with amazing messages, and I expected this one to be no different. After hearing the amazing review from Japan, I was even more excited to watch it. At a certain point in the film, however, I was asking myself why I was watching it. It seemed like yet another rendition of a story I knew too well: Beauty and the Beast. What made it so different? Why did so many people love it? Well, I got my answer by the end. The big twist, the Beast’s secret, was worth every second of waiting. It’s become one of my favorite movies and has inspired me to pursue such amazing writing and execution in other movies. It was so powerful and left me in tears. I strongly recommend watching this film.

I must warn you that this piece deals with heavy topics such as abuse, grief, and trauma. Viewer discretion is advised.

For more movie reviews, check out our Movie Review archives.

Hi! I'm an aspiring writer who loves her craft! My hobbies include reading, writing, sewing, watching TV (including kdrama and anime), and learning new languages.

Poem: In a Sea of Caucasian