Volunteering this Summer Changed My Life 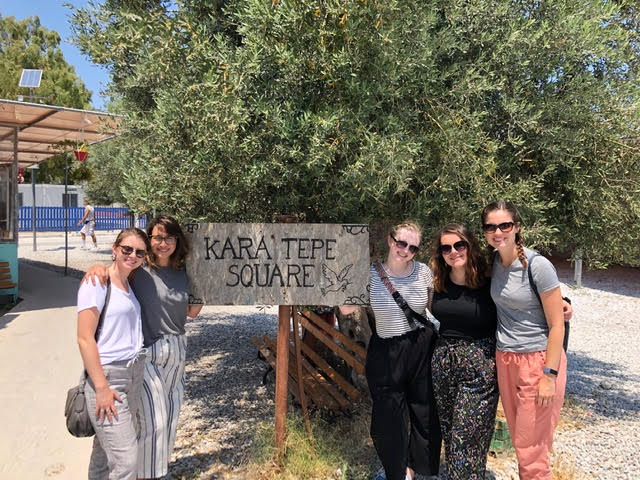 This summer I am volunteering in two different refugee camps in Lesvos, Greece. Kara Tepe, the first camp I volunteered at, is a camp for families only. It hosts over 1,000 people from primarily Afghanistan.

My Experience at Kara Tepe

Kara Tepe provides a community atmosphere for its residents, meaning that its staff and volunteers are comprised of both international volunteers, local staff and residents themselves. The homes are not described in terms such as “section” rather than “area” and the refugees are called “residents”. For the first two weeks, I volunteered with Movement on the Ground (MOTG), a nonprofit located in the camp, to put up shading between the 200 plus homes in the camp. Shading was extremely hard work because I was in the sun on the roof for hours a day, but I really learned a lot about the structure of an NGO (non-governmental organization) and the importance of working together as a community. I worked alongside residents from across the world and was able to communicate and work efficiently, through the awkward language barriers, through it all.

After working with MOTG, I worked with SOS Villages teaching English to children ages 7-13. It was a really great experience to learn about working with children from a different culture that also speak a different language.

My Experience at the Moria Refugee Camp

After working at Kara Tepe, I became a French translator for Kitrinos Healthcare, a medical NGO in Moria refugee camp. Moria is the most notorious camp on the island, equated to concentration camps and prison. Working in Moria is extremely heartbreaking. In the medical clinic, we see victims of war, torture, and just overall sickness. It is so hard to have to see people break down in front of you.

Being a translator makes you a conduit for language and understanding because at times you are the only one who can listen. It’s such a difficult place to navigate as an unbiased listener. Sometimes you just want to buy their medicine yourself or take them back to a doctor back home, but you can’t. And with very limited options at the camp, the doctors do their best. There just comes a point when you can’t do much with the small supplies we have and it is really heartbreaking.

This work has made me grow as a person to understand more complex issues on a deep, personal level. I am so beyond thankful to have had this opportunity to learn from the community in Moria and Kara Tepe.

You can change the world with as little time as a summer or with more time like a gap year. Check out how Alexandra took a year off and became an activist!

The Blessing and Curse of Make-Up

Deciding What to Study in College