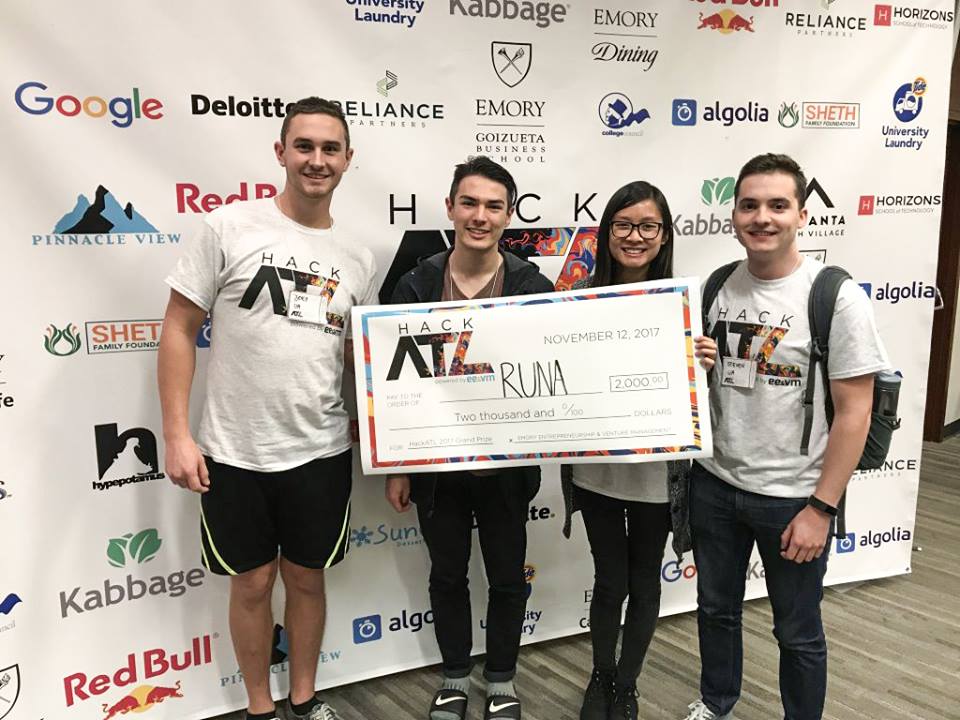 Emily is pursuing her MBA at the University of Alabama, and recently graduated with her B.S. in Computer Science with minors in Mathematics and Advertising. Outside of class, Emily founded CrimsonHacks, the first Major League Hacking hackathon at The University of Alabama. She works part-time at The Nine, a local web development agency. During her undergrad, she served as the web and design director for Crimson Kindness.

Outside of campus, Emily has been a software engineering intern for Apple, a student developer for the Center For Advanced Public Safety, an enterprise architecture intern for Mastercard, and a data science intern for Tektronix Communications.

Emily aspires to work in the intersection between social good and technology, in a field that is male-dominated.

Q: How did your passion for technology begin?

I’ve always been really into tech, but I guess the first time I realized I wanted to major in Computer Science was when I played on….. have you ever heard of Club Penguin?

(Emily and I go into a fit of laughter)

So I was an avid Club Penguin player for all of middle school. I even had a little WordPress blog. Thanks to that website, I got really into web development and web design. Ya know, there was just this huge community of Club Penguin blogs that had, like, 3 million, 4 million subscribers, it was insane.

But I saw this gaming program, and I thought, how do I make something like this? What do I need to do?

So I think that’s where my passion really stemmed. I honestly don’t know what I’d be doing if I wasn’t in computer science. It’s always been a path, that despite obvious obstacles, was meant to be.

Q: Did you know that, according to a study done by engineer Tracy Chou, women represent less than 12% of engineers at major tech companies? Why do you think this disparity exists?

There are a lot of theories, and it’s clearly such a problem, especially in the tech industry.

You know, I think people figure out what they’re interested in at a very young age, and for a lot of boys, it’s video games, and video games lead to careers and interest in tech.

Girls at a young age are taught to be involved with barbie dolls, dress up, make-up. There’s nothing wrong with that. But because of that, girls aren’t introduced to the marvels of engineering at an impressionable age.

Girls need to be told math is cool! Engineering is awesome! Tech is an amazing field! But they aren’t. Now we’re stuck with an industry that is so male-dominated that no female voices or direction shine through in things as simple as video game character narratives.

Q: What advice do you have to other women seeking to be in your field?

Don’t be discouraged by the number of boys in the room. Sometimes it is just completely overwhelming, but eventually, you’ll get used to it. Also, don’t conform to stereotypes, especially the kind that state the message,“women have natural inclinations that lead them to certain careers” No. Do not let false assumptions supposedly based in science keep you from going into scientific fields. Just because you’re a woman doesn’t mean you shouldn’t try to be an altering, powerful force in your field.

Q: Have you ever had to face stereotypes on campus that had to deal with your race or gender?

I was trying to go to an advising appointment once. I told the person at the front desk who I was, who my advisor was, and they didn’t believe me. They looked at the computer, looked at me, then said “Are you sure you aren’t an international student?”

I was born and raised in Nashville. Obviously I’m not an international student and I knew who my advisor was, but was doubted just because of what I look like.

That was my freshman year. I was so irritated. That was a big one on campus that stuck out.

Q: Growing up, who was the best female role model for you?

Well…I really liked Mulan, I mean, obviously. She was a princess who looked like me and didn’t conform to social norms around her.

I was also in band in high school and I had a couple of seniors in my section who were very strong leaders. I remember, as a freshman, thinking “Wow, I want to be like her.”

I think it’s important for girls when growing up to look up to women who you’re somewhat close to that are successful, even if their success is something as simple as killing their solo in band.

Q: Have you ever found good representation in the media that highlights the intersection of your experience?

Um, not really. Asian girls are always stuck in roles that are the main characters supportive, quirky, best friend. Ya know, the Gilmore Girls, Suite Life of Zack and Cody, need I go on?

There’s this one actress, her name is Anna Akana, who’s probably the closest to being my role model. She’s addressed the disparities of why asian women aren’t represented as successful and realistic main characters.

Q: What does success mean to you?

When I was a freshman in college, I thought success meant having a UA name tag, but now I know it’s beyond that. I don’t think my freshman self would ever imagine that I could get to where I am now: about to finish my MBA and get a real job. It’s crazy. Now I know success means being where I want to be and crossing goals off of my lists that I want to do, and not letting anything stop me from attaining those goals.

A Cautionary Tale About Just How Public the Internet Is: Harley Barber