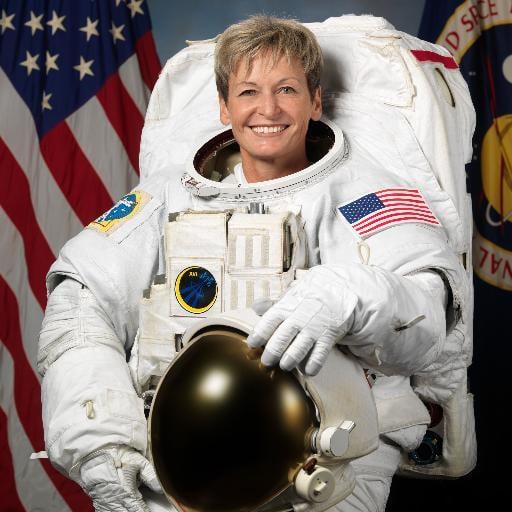 For the longest time, humanity’s involvement in space has been a boy’s club. Since the beginning of space exploration, women have been excluded from one of the country’s, and our species’, most defining era in history. Women were seen as not able to handle the intense knowledge of math, science, and incredible pressure that it requires to be an astronaut. But, over time, women in STEM have been proving this stigma wrong. Lots of inspiring women have made strides in the involvement of women in the space world, and, in this article, I will be focusing on NASA Astronaut Peggy A. Whitson.

Whitson was born in Mount Ayr, Iowa, on February 9, 1960. She grew up on a farm with her mother, father, and older sister. She was always fascinated by space and the stars, but her dreams of being an astronaut were solidified when she watched Neil Armstrong walk on the moon when she was 9 years old. She went to Iowa Wesleyan College, where she majored in Biology and Chemistry. Then, she got a Ph.D. in Biochemistry from Rice University. She worked in research for NASA Johnson Space Center for biochemistry and medical science positions for an entire decade, but her hard work finally paid off when she was chosen as an astronaut candidate in April 1996.

After 5 years of rigorous training, Whitson first traveled to space in 2002, aboard the shuttle Endeavor, as a flight engineer. She spent a total of 184 days in space and performed experiments in both microgravity and human life sciences. When she arrived back on Earth, she lived for two weeks underwater in as commander of the NEEMO, aboard the Aquarius underwater laboratory. She then continued her space career by breaking numerous space records including: the first woman commander, the woman with the most space walks, the first woman to serve as Chief of the NASA Astronaut Office, the oldest woman spacewalker, the longest time ever spent in space by any NASA astronaut, the first woman to command the International Space Station, and, on top of all that, she has won numerous awards from NASA and other space organizations.

As a girl who dreams of space, it really inspires me to see another woman who is passionate about space and has gone the distance–making space more accessible to all genders. Thank you, Peggy Whitson! You are incredible.

“As a 9-year-old kid growing up on a farm in Iowa, I was inspired by the men who walked on the moon. When they picked the first set of female astronauts, I think that was when I decided I really wanted to become an astronaut.” – Peggy Whitson

Luck of a Draw: How I Discovered my Passion for Writing