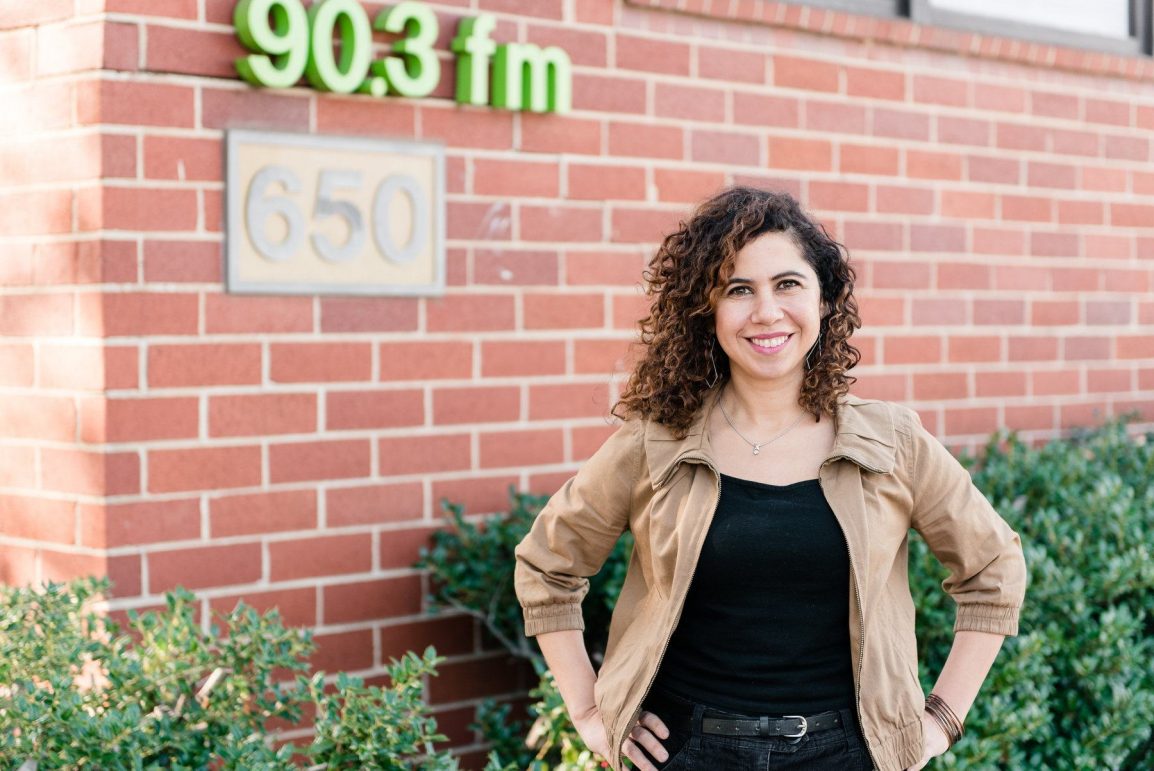 Tips from a Journalism Professional

When she was in middle school, Gigi Douban used to go to the library and look through all the young adult magazines. She would read the articles and think “I could do that!” And her dream to become a magazine writer began. In high school, she wrote for the yearbook, and in college, she wrote for the school paper.”Writing is the kind of thing that I always had with me.” No matter where she went, writing always drew her attention.

As a young adult, she moved to Birmingham, Alabama, and got a job as a reporter for The Birmingham News. She covered all sorts of stories from little towns and communities in the area. About six years passed, Gigi went to a “making radio” workshop that the news director at the time for the public radio station, WBHM, had put on. “That’s when I fell in love with it,” she says. By exploring what she liked, she followed a path that led to her to her current job.

First, she checks up on the news by checking in on different news sites and Twitter.

Then she checks her calendar for any meetings.

She assigns stories to reporters in the morning so they can have an early start on them. Today, she has assigned a local story that is actually going on the national news to her coworker, Andrew. It is devastating: A dock fire in north Alabama has killed at least eight people, and destroyed more than 30 boats. You can read about the tragic story here.

The routine varies a lot. Sometimes Gigi edits stories that reporters are working on. Today, she edited a story with general assignment reporter Janae Pierre. They edited multiple times and time it to see if the story was about the right length. Then Janae produced the sound part of it and Gigi listened to make sure it all sounded right so it may be ready to air in a day or so.

“You have to do a little bit of homework on the front end front end,” she tells me. This prepares her to ask intelligent questions about the topic. Also, though, stupid questions must be asked. “[Approach] it from the standpoint of somebody who knows nothing about this.” That way, she says, listeners won’t be lost. Gigi explains that if she even remotely wonders about something, she asks about it, because chances are, somebody else out there is wondering the same thing. It’s a lot like math class.

How to stay informed (advice from a professional)

If the words “impeachment trial” and “coronavirus” mean nothing to you, it is time to start paying more attention to the news. Here are some tips:

Consume news from a variety of sources.

This will make sure your information is not based solely on one viewpoint. Ideally, all new outlets should be free of bias. The fact is, though, that news articles are written by people, and people tend to be biased.

Check for updates, because news sometimes changes. In addition, the understanding of a reporter may change, or perhaps their bias, once again, may come through. Always make sure your sources are as credible as possible, of course, but remember that even the most reputable news sources may at times have flaws.

The headline doesn’t tell the complete story. Twitter and Facebook are common places for people to get their news these days. This doesn’t have to be a bad thing, but make sure you do your research and read the article before sharing to your friends. You don’t want to spread misinformation! Gigi says it’s not a matter of turning away from social media, (although your grandparents may disagree) “but just approaching it with caution and keeping a skeptical eye.”

Gigi tells me she recently met with some students and recent graduates from the Center for Collaborative Journalism at Mercer University. “Listening to them,” she tells me, “made one thing clear: the future of journalism is bright.” In fact, she liked their wisdom so much, she jotted down their top tips for aspiring journalists.

1. Be a go-getter. Don’t sit on the sidelines. Tackle every assignment that comes your way and know that you can do it. It won’t always be perfect. That’s ok. It’s a start.

2. Try everything — radio, television, digital, and print. You’ll do some of your best work where you least expect it.

3. Find good mentors and stay close with them. They will open doors for you. (my aside: We mentors also love hearing from you. Your messages saying hello and telling us what you’re up to from time to time really brighten our days.)

4. You aren’t too young to be a mentor yourself. If you’re a junior or senior in college, mentor freshmen and students in high school. And when you land that first job, tell those coming up behind you how you did it.

5. Beware of imposter syndrome*, especially when you’re working with or managing a team of older or more experienced people. Don’t be daunted. You’re a leader. Own it.

6. People love the straight path to that dream job, but often that meandering Alice-in-Wonderland route is often the one that ultimately gets you where you need to be. Be patient and enjoy the ride.

7. There will always be naysayers. Find people who share your vision about ideas and projects others might not be on board with and work together to make it happen.

Gigi Douban would like to give a special thanks to Katie Atkinson, Avery Braxton, Anisah Muhammad, and Elizabeth Tammi for sharing their stories.

What is imposter syndrome?

Imposter syndrome is essentially the feeling that you aren’t good enough for the task that lays ahead of you. This feeling is common in high achievers who may experience doubt when they are presented with a new, challenging opportunity.

In the spirit of February and Valentine’s Day coming up, I decided to ask about this problem and how to beat it to reach a higher level of self-confidence. Imposter syndrome is something Gigi has experienced herself. “I have taken on assignments that I wasn’t sure I could pull off,” she tells me. This includes accepting a job that sounded exciting, but that she wasn’t positive she was qualified for, and starting projects that were challenging.

What she learned? “It’s really good to make yourself uncomfortable.” Indeed, that’s how we grow as people, and prove to ourselves that we are capable of handling the obstacles that life throws at us.

Lydia is a high school senior and the president of Girlspring. She hopes to be an environmental psychologist someday.

How to Effectively Work from Home

Top Two Best Valentine’s Day Chocolates – The Results are In!