Getting Gritty with It’s A Girl’s Life 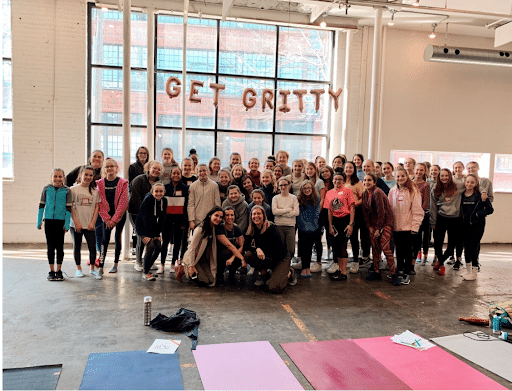 Say hello to Charlotte Wasserman! Charlotte is the author of It’s a Girls Life Blog on Instagram, and she has own website and blog at https://itsagirlslifeblog.com

She recently organized a huge girls only event in Cleveland and we asked her to share the story of how she did it with us!

Get Gritty Cleveland 2019 was an interactive and motivational event for girls in grades 7 through 10. The goal for this workshop was for girls to explore and redefine the way they view failure, strengthen their self-awareness and positive self-talk, and gain tools to be empowered to handle challenges and setbacks.

Also included in this lineup, was Romona Robinson, a local news anchor and author of A Dirt Road To Somewhere, who shared her gritty life story with the girls, emphasizing how you can create a very successful life even when you think you are at your lowest low and even when you think you have nothing. We also all enjoyed a fun group lunch and tasty, healthy snacks, all donated by local Cleveland companies.

Throughout my middle school years, I became more aware of my interests.

I became very interested in connecting and helping other girls like me, and I decided to write a blog to give girls tips and share information that I thought would be helpful, interesting and fun.

In February of 2018, I was inspired by something I saw on Instagram.

I saw a post from the GRACEDBYGRIT Foundation about the workshops they had for girls. They taught girls about grit using their G-R-I-T formula, out in California, where they are headquartered. Seeing this sparked my attention and made me think that I would love to do something like this in Cleveland. A few days later, I was on the phone with Sarah Andersen, who created the foundation. She loved that I reached out and was very excited about the idea of building off what they were doing in California and being able to reach girls in other cities.

We were excited and still had a lot to discuss, but I immediately started brainstorming and reaching out to local, well respected female entrepreneurs, authors, and health and wellness mentors and coaches who may be interested in talking at the event.

After we selected our final facilitators together, I decided to create a Teen Host Committee.

The goal was to identify a group of girls to help market the event. It was important the girls come from different communities and schools so that we could reach a diverse group of attendees.

Still a few months left, but much work was still to be done.

It was not an easy task to juggle all the work ahead and having school on top of it. I decided to create a social media marketing plan for the final month before the event. I designed every posted picture, caption, and hashtag that would be shared for the last 4 weeks leading up the event. This was so helpful to do upfront instead of on the fly, week by week.

My mom was using Facebook to share the event with parents and her social network. This was very helpful because parents could then encourage their daughters to sign up.

I also reached out to my favorite local companies and asked them to donate to our gift card (punch card) giveaway. Many times I was waiting for one of these companies to get back to me or waiting for the marketing flyer to be redesigned in California (when we needed it yesterday) or learning that someone on the teen host committee could not make it anymore. During the stressful times, I kept the idea in my head that I knew I would get through this and if I kept pushing, the day of the event would come, and the work would all be worth it.

I also tried to look at every punch or curveball as a learning process, because to be honest, I learned that this is what creating something from scratch, something new that has never been done before, is all about.

Before we knew it, February 2nd, the day of the event finally came.

Get Gritty Cleveland had a total of 115 girls from different areas and schools in the Cleveland area!

At the beginning of each session, I saw girls coming into and filling the naturally-lit, huge warehouse space. They filled it not only with their physical bodies but also with surprisingly uninhibited energy and spirit.

Seeing 115 girls joining me sparked a feeling that I never had felt before, a feeling of satisfaction and everlasting smiles because I could see my hard work for the last year finally come together into a great success.

Get Gritty Cleveland was the bud of an ever-growing flower that motivates me.

This flower motivates me to continue to work on ways to gather girls from different places together and learn about GRIT and how to be the best they can be.