Women Who Fought for the Vote 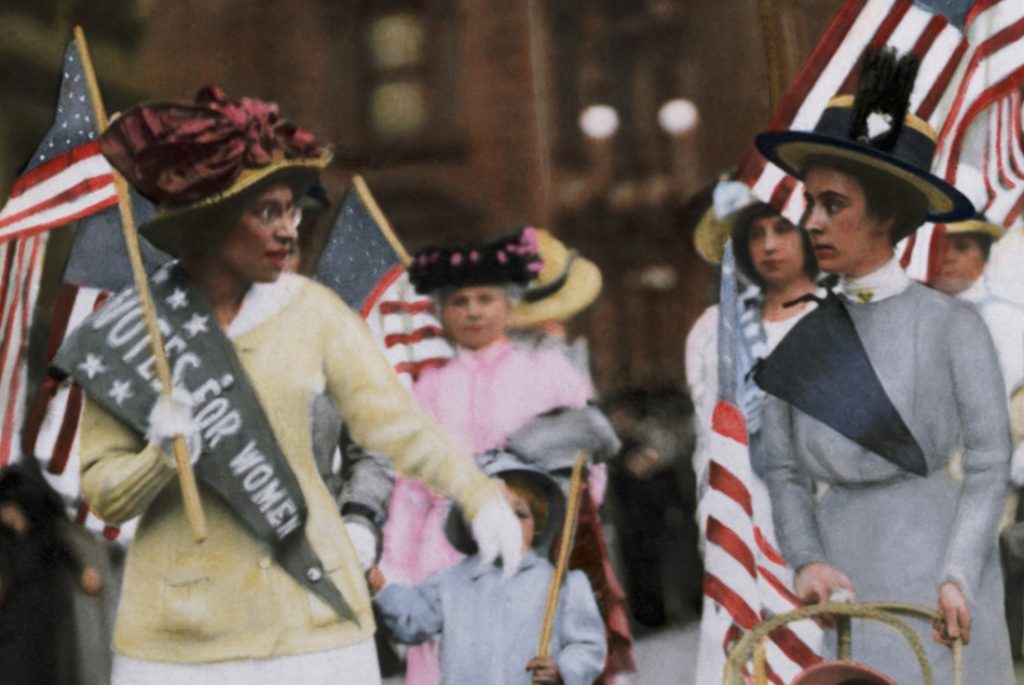 On Election Day in 1920, millions of American women exercised their right to vote for the first time. For almost 100 years, women (and men) had been fighting to win that right: They had made speeches, signed petitions, marched in parades and argued over and over again that women, like men, deserved all of the rights and responsibilities of citizenship. The leaders of this campaign did not always agree with one another–in fact, sometimes their disagreements threatened to derail their movement–but each was committed to the enfranchisement of all American women.

Perhaps the most well-known women’s rights activist in history, Susan B. Anthony was born on February 15, 1820, to a Quaker family in the northwestern corner of Massachusetts. Anthony was raised to be independent and outspoken: Her parents, like many Quakers, believed that men and women should study, live and work as equals and should commit themselves equally to the eradication of cruelty and injustice in the world.

Susan B. Anthony and Elizabeth Cady Stanton lived in a part of upstate New York that would become known as the “Burnt District” or the “Burned-Over District” because it was home to so many religious revivals, utopian crusades and reform movements: They swept through the region, people said, as unstoppably as a forest fire.

Before she joined the campaign for woman suffrage, Anthony was a temperance activist in Rochester, New York, where she was a teacher at a girls’ school. As a Quaker, she believed that drinking alcohol was a sin; moreover, she believed that (male) drunkenness was particularly hurtful to the innocent women and children who suffered from the poverty and violence it caused. However, Anthony found that few politicians took her anti-liquor crusade seriously, both because she was a woman and because she was advocating on behalf of a “women’s issue.” Women needed the vote, she concluded, so that they could make certain that the government kept women’s interests in mind.

In 1853, Anthony began to campaign for the expansion of married women’s property rights; in 1856, she joined the American Anti-Slavery Society, delivering abolitionist lectures across New York State. Though Anthony was dedicated to the abolitionist cause and genuinely believed that African-American men and women deserved the right to vote, after the Civil War ended she refused to support any suffrage amendments to the Constitution unless they granted the franchise to women as well as men.

This animosity eventually faded, and in 1890 the two groups joined to form a new suffrage organization, the National American Woman Suffrage Association. Elizabeth Cady Stanton was NAWSA’s first president; Anthony was its second. She continued to fight for the vote until she died on March 13, 1906.

Alice Paul was the leader of the most militant wing of the woman-suffrage movement. Born in 1885 to a wealthy Quaker family in New Jersey, Paul was well-educated–she earned an undergraduate degree in biology from Swarthmore College and a PhD in sociology from the University of Pennsylvania–and determined to win the vote by any means necessary.

While she was in graduate school, Paul spent time in London, where she joined the suffragist Emmeline Pankhurst’s radical, confrontational Women’s Social and Political Union and learned how to use civil disobedience and other “unladylike” tactics to draw attention to her cause. When she returned to the United States in 1910, Paul brought those militant tactics to the well-established National American Woman Suffrage Association. There, as the chair of NAWSA’s Congressional Committee, she began to agitate for the passage of a federal suffrage amendment to the Constitution like the one her hero Susan B. Anthony had wanted so badly to see.

On March 3, 1913, Paul and her colleagues coordinated an enormous suffrage parade to coincide with–and distract from–President Wilson’s inauguration. More marches and protests followed. The more conservative women at NAWSA soon grew frustrated with publicity stunts like these, and in 1914 Paul left the organization and started her own, the Congressional Union (which soon became the National Woman’s Party). Even after the U.S. entered World War I, the NWP kept up its flamboyant protests, even staging a seven-month picket of the White House.

For this “unpatriotic” act, Paul and the rest of the NWP suffragists were arrested and imprisoned. Along with some of the other activists, Paul was placed in solitary confinement; then, when they went on a hunger strike to protest this unfair treatment, the women were force-fed for as long as three weeks. These abuses did not have their intended effect: Once news of the mistreatment got out, public sympathy swung to the side of the imprisoned activists and they soon were released.

In January 1918, President Wilson announced his support for a constitutional amendment that would give all female citizens the right to vote. On August 26, 1920, Tennessee became the 36th state to ratify the amendment, making it law.

In 1920, Alice Paul proposed an Equal Rights Amendment (ERA) to the Constitution. (“Men and women,” it read, “shall have equal rights throughout the United States.”) The ERA has never been ratified.

Elizabeth Cady Stanton was one of the foremost women’s-rights activists and philosophers of the 19th century. Born on November 12, 1815, to a prominent family in upstate New York, Elizabeth Cady was surrounded by reform movements of all kinds. Soon after her marriage to abolitionist Henry Brewster Stanton in 1840, the pair traveled to the World Anti-Slavery Convention in London, where they were turned away: Female delegates, they were told, were unwelcome.

This injustice convinced Stanton that women needed to pursue equality for themselves before they could seek it for others. In the summer of 1848, she–along with the abolitionist and temperance activist Lucretia Mott and a handful of other reformers–organized the first women’s-rights convention in Seneca Falls, New York. Some 240 men and women gathered to discuss what Stanton and Mott called “the social, civil, and religious condition and rights of women.” One hundred of the delegates–68 women and 32 men–signed a Declaration of Sentiments, modeled on the Declaration of Independence, declaring that women were citizens equal to men with “an inalienable right to the elective franchise.” The Seneca Falls Convention marked the beginning of the campaign for woman suffrage.

Like Susan B. Anthony, Stanton was a committed abolitionist; however, she too refused to compromise on the principle of universal suffrage. As a result, she campaigned against the ratification of the 15th Amendment to the Constitution, which guaranteed black men the right to vote but denied it to women.

After the fight over the 14th and 15th Amendments, Stanton continued to push for women’s political equality–but she believed in a much broader vision of women’s rights. She advocated for the reform of marriage and divorce laws, the expansion of educational opportunities for girls and even the adoption of less confining clothing (such as the pants-and-tunic ensemble popularized by the activist Amelia Bloomer) so that women could be more active. She also campaigned against the oppression of women in the name of religion–“From the inauguration of the movement for woman’s emancipation,” she wrote, “the Bible has been used to hold her in the ‘divinely ordained sphere’”–and in 1895 published the first volume of a more egalitarian Woman’s Bible.

Elizabeth Cady Stanton died in 1902. Today, a statue of Stanton, with fellow women’s rights activists Susan B. Anthony and Lucretia Mott stands in the rotunda of the U.S. Capitol.

Lucy Stone, born in Massachusetts in 1818, was a pioneering abolitionist and women’s-rights activist, but she is perhaps best known for refusing to change her last name when she married the abolitionist Henry Blackwell in 1855. (This tradition, the couple declared, “refuse[d] to recognize the wife as an independent, rational being” and “confer[red] on the husband an injurious and unnatural superiority.”)

After she graduated from Oberlin College in 1847, Stone became a traveling lecturer for the American Anti-Slavery Society–advocating, she said, “not for the slave only, but for suffering humanity everywhere. Especially do I mean to labor for the elevation of my sex.” She continued her activism on behalf of abolitionism and women’s rights until 1857, when she retired from the anti-slavery lecture circuit to care for her baby daughter.

After the Civil War, advocates of woman suffrage faced a dilemma: Should they hold firm to their demand for universal suffrage or should they endorse–even celebrate–the 15th Amendment while they kept up their own campaign for the franchise? Some suffragists, such as Susan B. Anthony and Elizabeth Cady Stanton, chose the former, scorning the 15th Amendment while forming the National Woman Suffrage Association to try and win the passage of a federal universal-suffrage amendment. Stone, on the other hand, supported the 15th Amendment; at the same time, she helped found the American Woman Suffrage Association, which fought for woman suffrage on a state-by-state basis.

Ida B. Wells, born in Mississippi in 1862, is perhaps best known for her work as a crusading journalist and anti-lynching activist. While working as a schoolteacher in Memphis, Wells wrote for the city’s black newspaper, The Free Speech. Her writings exposed and condemned the inequalities and injustices that were so common in the Jim Crow South: disfranchisement, segregation, lack of educational and economic opportunity for African-Americans, and especially the arbitrary violence that white racists used to intimidate and control their black neighbors.

Wells’s insistence on publicizing the evils of lynching, in particular, won her many enemies in the South, and in 1892 she left Memphis for good when an angry mob wrecked the offices of The Free Speech and warned that they would kill her if she ever came back. Wells moved north but kept writing about racist violence in the former Confederacy, campaigning for federal anti-lynching laws (which were never passed) and organizing on behalf of many civil rights causes, including woman suffrage.

In March 1913, as Wells prepared to join the suffrage parade through President Woodrow Wilson’s inaugural celebration, organizers asked her to stay out of the procession: Some of the white suffragists, it seemed, refused to march alongside blacks. (Early suffrage activists had generally supported racial equality–in fact, most had been abolitionists before they were feminists–but by the beginning of the 20th century, that was rarely the case. In fact, many middle-class white people embraced the suffragists’ cause because they believed that the enfranchisement of “their” women would guarantee white supremacy by neutralizing the black vote.) Wells joined the march anyway, but her experience showed that to many white suffragists, “equality” did not apply to everyone.

Wells continued to fight for civil rights for all until she died in 1931.

Easy Workouts to do at Home