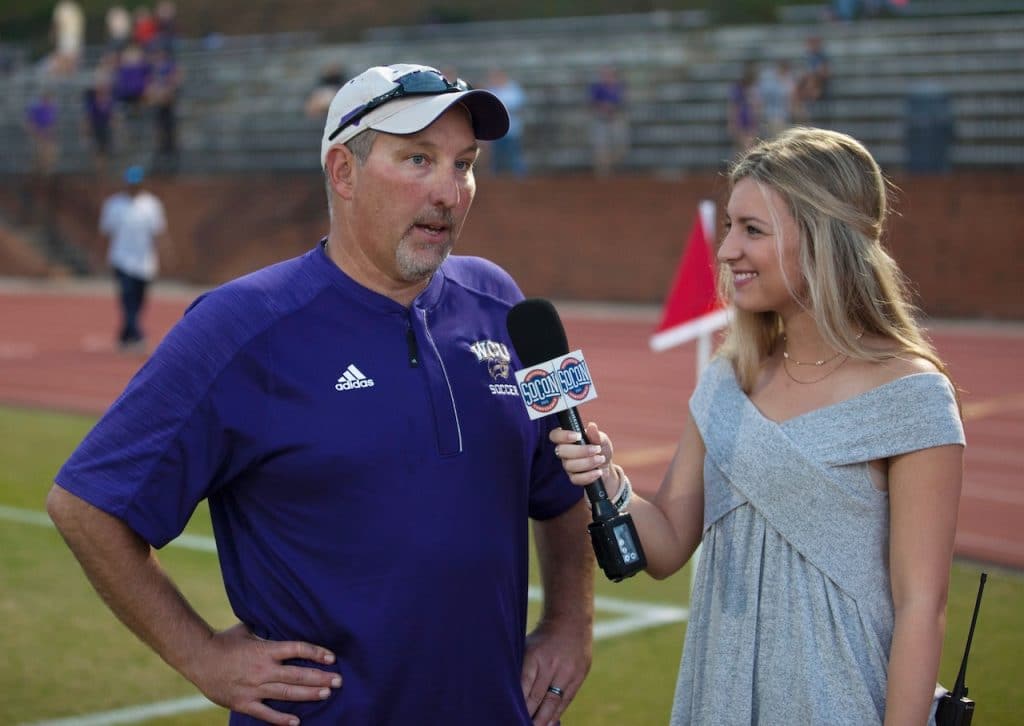 In a world that is dominated by men in the sports field, it is wonderful to see girls making powerful strides in the athletic world as well. We have interviewed Macy Marin, who is a student at Samford University and works very closely with their athletic department, often sideline reporting at away games for 99.1 The Game, and sometimes working at home as a booth manager. Macy did a sideline report for ESPN 3 for women’s basketball last season, and is scheduled to do one this season as well. She also does any sideline reporting for women’s soccer, and she works with the football team’s athletic academic advisor when they are both travelling with the team. Macy obviously is very committed to Samford sports, and I was interested to see what else she could tell us about working so closely with all the different athletics at the university.

What is your favorite part about getting to work so closely with the different sports teams at Samford?
My favorite part is the athletes. I have a passion for the game of football and helping the athletes. Whether it be telling their stories on the sidelines, giving them a voice, or helping them graduate by working with their athletic academic councilor. I love the game so much, but nothing beats the relationship you build with the athletes or knowing that you made an impact in their success. For some athletes, sports are their ticket to an education or a better life, and seeing them happy and successful makes all the hard work worth it.

While speaking in front of people (or camera), do you get nervous at all?
I feel like if you aren’t nervous you aren’t pushing yourself to new opportunities. So yes, I do get nervous, but (not sure if this is a good thing or not) I like to talk a lot! So when I get in front of the camera and start talking all the nerves go away! It is really fun, I have just found that if you prepare and put in the work there is no reason to be nervous! You just have to make sure you are prepared and knowledgeable as possible!

Do you have any really cool stories of something that happened while you were working with any of the sports teams?
Not any specific story, but since I work with the Samford football team with the academic side of things, I know the boys very well. So the games I sideline reported they would smile, wave, speak to me on the sideline, encouraging me to do well. That is what makes reporting so special, and the guys do not know how much I appreciate it. They are working and have a job to do, but still make a point to speak to me out of respect. I worked one game this season, and then was not on the sideline the next game, and the guys came to me and asked where I was the next week. They told me they liked me down there with them because I was normal and smiled and didn’t just stare at them. I started cracking up, but I really appreciated them saying that.

What has been one of the most rewarding things while working with Samford sports teams?
The relationships with the athletes. I have been so blessed to have so many amazing opportunities with both media and with the academic advising. The people that have been there to teach me have become role models. Learning from them and building relationships with them is something I will always be thankful for.

What would you say to a young girl who is trying to also pursue a career in working with sports in any sort of way?
To work hard and and never stop dreaming, girls belong in the sports field. There are so many good role models who have paved the way for us. Two of my favorite are Sam Ponder and Laura Rutledge. I love watching and learning from them. I would also tell any young girls who want to work in sports to work together. It is easy to see it as a competition, but I am the person I am today from learning from other great women in the field. When someone turns you down, use that as motivation! Always stay true to yourself, keep your head up, and enjoy the ride- because boy is it fun!