The Relevance of Calvin and Hobbes Today: Corruption in the News 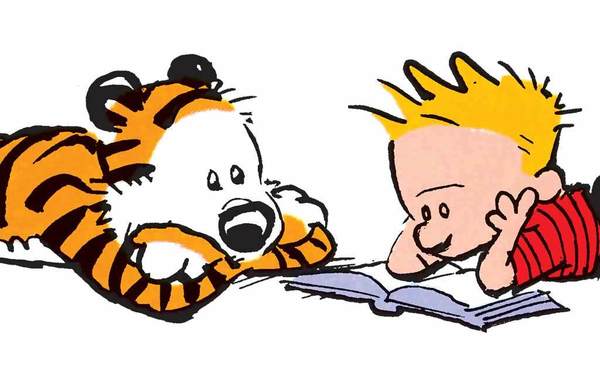 Calvin and Hobbes is a comic strip by Bill Watterson that was released daily from November of 1985 to December 1995. The cartoons were used as vessels for portraying serious topics simply through an opinionated boy, Calvin, and his make-believe tiger, Hobbes. Although new original strips are not being produced, they live on in form of collections and on the official Calvin and Hobbes website (https://www.calvinandhobbes.com/about-calvin-and-hobbes/).  From topics of the existence of fate to the selfishness of man, the cartoons touch on topics that are extremely relevant in today’s society. In this article, I will be presenting a specific cartoon addressing the corruption of the news.

In this particular strip, Calvin yells at a tv screen complaining about the lack of information, and how this is wrongly defined as “news.” The news and media have been under-fire for the last few of years, especially in the United States. The term “fake news” has been used time and time again after President Donald Trump used it on his twitter on countless events. Although its popularity grew in 2016, the term was originally coined in the 1800s, with a neutral connotation and a simpler, less political denotation. Fake news: can refer to false new stories, often spread as propaganda on social media. It can also characterize any information that one finds critical about themselves, popularized as a catchphrase by Donald Trump after the 2016 presidential election. The term itself is can usually be described as false information. In the case of the President, he will refer to information as fake news when it has been backed up and proven by several sources to be true.

News: newly received or noteworthy information, especially about recent or important events. Along with the political corruption of the news, there is a phenomenon of presenting not news, but particular stories that aren’t incredibly relevant to the state of affairs. For example, Buzzfeed, “the leading independent digital media and tech company delivering news and entertainment content to a global audience,” has been criticized for posting articles that are not relevant, and even offensive to some groups of people. When expected to present equal parts news and entertainment, often the entertainment is more common. Many have pointed out that quantity is more valued than quality in their case, and that the articles are more similar to opinion pieces, and are not informative.

Sensationalism and fake news are similar terms. However, the main difference is that “fake news” is more used than sensationalism. Although we often forget about sensationalism, its relevance in the world today is just as important as fake news. Sensationalism: the use of exciting or shocking stories or language at the expense of accuracy, in order to provoke public interest or excitement. Because many people access their news online, online news sources take advantage of the fact that each time a person clicks on a story, they will receive earnings from ads and other monetization inputs. Sensationalism in the modern day may also be referred to as “clickbait,” literally meaning sensational bait that will get you to click on the article. This phenomenon takes place in vain when the job of the news is to inform instead of obtain. Sensationalism in the cartoon is mentioned in terms of television rather than handheld devices or computers. The type of sensationalism today is even more dangerous because of the access that children have to it. Hackers can even use click bait as a way to inject a virus into a system. Next time you see an article claiming a title too crazy to be true, just don’t click.

Finally, in the third part of the strip, Calvin says, “Fortunately, that’s all I have the patience for.” This is a statement that I’m sure many people can relate to. Sometimes the struggles of the world are just too much, and it’s nicer to have tame information at your disposal. However, it is important to know what is really going on. Because many people would rather hear the good than the bad, they just accept the fake news and sensationalism. This is not a good mindset to have. It is always needed to take a break from the news, but don’t let the need for happiness overtake the need for true information.

What can we do?

To lessen the spread of fake news, always investigate the information given. To make sure that we all get information that is true and backed-up, double or triple check what’s being put out there. If you read an article that says something a little off, research it. If you read something from one website, read other sources. Always do your homework before you tell someone about something. This is especially important for us teens. Do your research, and have fun doing it! As teenagers and rising leaders, we can stop the spread of fake news and inform each other on the important things.