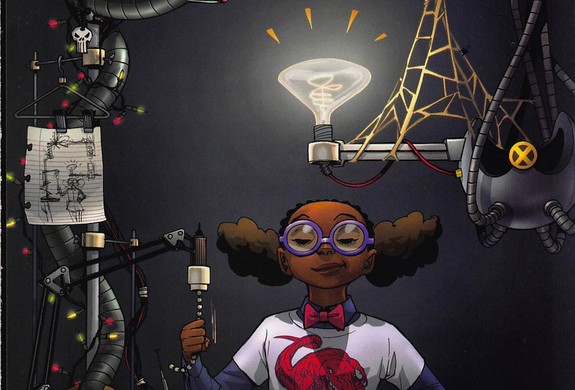 Marvel Comics has demonstratively pushed to diversify their superhero line the last couple of years – a push that seems to continue to gain steam. Now the publisher is seemingly making a point to call attention what they announced somewhat innocuously at Comic-Con International: San Diego on Sunday – that none of the usual braintrust of Reed Richard (or his daughter Valeria), Tony Stark, Peter Parker, Amadeus Cho, T’Challa, or even Doctor Doom for that matter, are considered the smartest person in the Marvel Universe.

Instead, Marvel’s top genius is officially (or at least will be) little Lunella Lafeyette, the nine-year-old hero of Moon Girl & Devil Dinosaur.

The announcement of Lunella’s status was made, somewhat off-handedly, in SDCC’s Women of Marvel panel by Marvel’s Director of Content and Character Development Sana Amanat, who may be best known as one of the co-creators of the current Ms. Marvel, Kamala Khan, the character that may have been the flashpoint for Marvel’s aggressive diversity push.

“Moon Girl will discover she’s the smartest person in the Marvel Universe at only 9 years old,” said Amanat Sunday, referring to an upcoming story in the planned relaunch of Moon Girl & Devil Dinosaur as part of “Marvel NOW!”

Interestingly and importantly, Lunella isn’t just the smartest person in the Marvel Universe, she’s also black and female – two characteristics not typical for the Marvel’s usual cast of super-geniuses. Female scienctific super-genuises are rare for either of the two major comic book publishers, relatively even more so, in fact, than black super-genuines. The role has been historically filled by males, a product of both major publishers’ superhero lines’ birth in the late 30s and early 60s, respectively.

Naming the smartest person in the Marvel Universe a nine-year-old black female is definitely grounbreaking, a fact that seems to have subsequently occurred to Marvel over the last couple of days. While not initially promoted by the publisher as a convention announcement, Marvel seems to be pushing the story through more ‘mainstream’ news outlets such as Buzzfeed and Teen Vogue over the last two days.

It was not made clear how Lunella earns the lofty status of being the smartest person in the Marvel Universe, whether it’s a product of great minds like Reed Richards, Tony Stark, and Bruce Banner potentially being off the table because of the events of Secret Wars or the possible outcome of Civil War II, or if she discovers she’s just plain smarter than everyone else.

Moon Girl & Devil Dinosaur will relaunch as part of Marvel NOW!, likely with an added emphasis on the pressures of being the smartest person alive.

She travels: Highlights of National Parks in Alberta, Canada