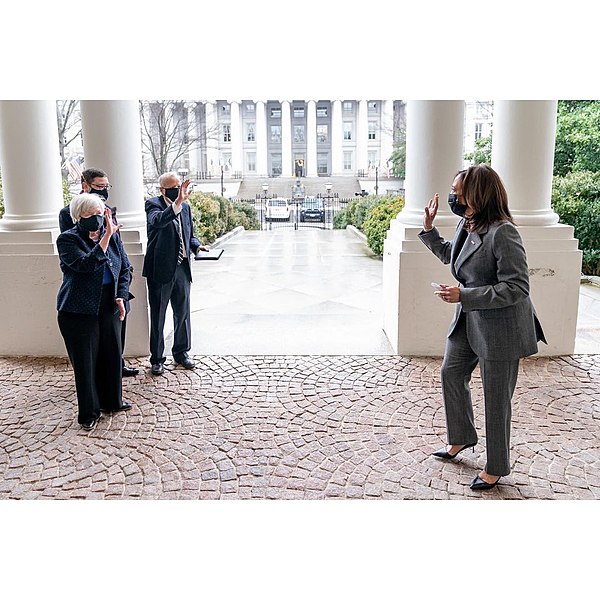 Janet Yellen was confirmed as the first female Secretary of Treasury on Monday, January 25th. The Senate confirmed Yellen with an overwhelming majority of 84-15 votes. This was because she was undoubtedly qualified for the position.

On January 26th, Yellen was sworn into office by the first female Vice President, Kamala Harris. Both women are pioneers in their positions. It was a historical moment when they stood across from each other during Yellen’s inauguration.

Who is Janet Yellen?

Janet Yellen was born in Brooklyn, New York in 1946. She was a part of a Polish Jewish family that lived in a Brooklyn borough, making her the first Jewish woman to hold the position. Her mother was an elementary school teacher, while her father was a physician that worked inside of their home.

Yellen moved into the education world with vigor, becoming the class valedictorian at her high school, Fort Hamilton. She would go on to graduate from Yale University in 1971 with a degree in economics, before becoming an assistant professor at Harvard. Out of the two dozen graduates of economics from Yale in 1971, Yellen was the lone female.

Yellen would move into a career in education, teaching as a professor of MBA (Master of Business Association) at the University of California, Berkeley. During this time she would win the Haas School’s Outstanding Teaching Award twice over.

Time in The Federal Reserve

From 2010 to 2014, Yellen served as only the second female to become the Vice President of the Federal Reserve. The woman to first occupy this position was Alice Rivlin. Rivlin occupied the position from 1996 to 1999.

In 2014, Yellen officially became the first woman to head the Federal Reserve. During her time as President, she produced record-low interest rates and brought about high levels of bond buying. Likewise, the unemployment rate, during her time as chair, dropped from 6.7 percent to 4.1. Yellen was one of the most successful presidents of the Reserve in its history. Despite this, Donald Trump decided to place a different nomination for the position in 2018, causing Yellen to leave the Reserve.

Yellen, in her new position of Secretary of Treasury, is inheriting an economy in the midst of a global pandemic. Unemployment rates are high, people have lost their homes, their jobs, and their lives. Yellen has stated that she plans to advocate for an additional $1,400 stimulus check for houses that make under $75,000 annually, and an increase in unemployment benefits. Similarly, she is aiming to tackle the current K economy, which she describes as an economy where the wealthy increase their wealth and the poor slide into deeper poverty.

Yellen gave a speech after her inauguration. She stated: “In addition to the pandemic, the country is also facing a climate crisis, a crisis of systemic racism, and an economic crisis that has been building for fifty years. I believe our department can play a major role in addressing each of these crises.”

In what is unarguably dark times, Yellen proves to be a ray of light. Her experience and philosophy in economics make her a soldier of the American people in the fight against a failing economy.

Want to read about more women in politics? Check out this GirlSpring article on Everything You Need to Know About Kamala Harris.

14 of My Favorite Romance Books