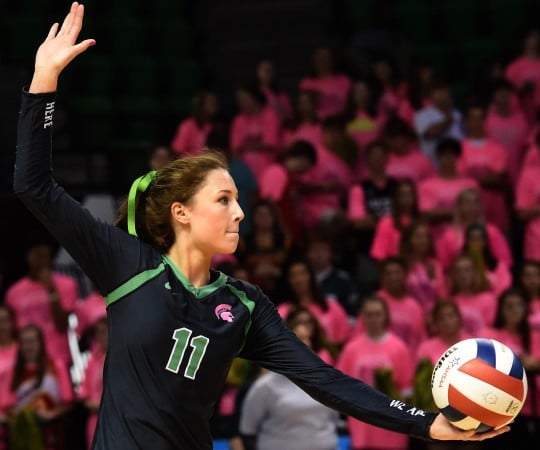 We’re here today with Emmy Kilgore, who is here to talk about her impressive volleyball career! She just won a big award for her school!

Hi Emmy, thanks for talking with us today! We’ll start with the basics, but then we want to hear all about your award!

What grade are you in and what school do you go to?

I’m in the 12th grade and I go to Mountain Brook High School.

I heard that you have been named MVP for volleyball for the state, is that right?

Yes, I was named Most Valuable Player for the 7A State Volleyball tournament.

That’s awesome! What exactly does that title mean?

Once we make it to the elite 8, we must play and win 3 games to make it. When we win those three games we get named State Champions for 7A division, then they pick a player who had been “the most valuable player” for the whole tournament. At the tournament, after we won, I was named MVP for the 7A division.

Was this a goal of yours?

It never came to mind about receiving this award and I never pictured myself winning it because it is a team sport. I didn’t think about it at first, but I knew that I would be up for it if my team won, which was my ultimate goal. The MVP award wasn’t my main goal. My main goal was winning as a team, and the MVP award just happened to be a part of that.

Did you have to work hard to get to this point?

Yes, I’ve played volleyball since I was in 6th grade and I’ve had to put in a lot of hard work and time. I don’t think people realize how much time we put in, we have to practice every day, except Saturdays, from 2:45 pm to 5:45 pm. We also have traveling games and tournaments that take up a lot of our time.

When you started playing in 6th grade, had you done other sports and end up falling in love with volleyball?

How do you balance your sports schedule with your academic workload?

It has been tough. In practice, we always talk about how we are going to use volleyball as an outlet for school because maybe we had a bad day, but we must be at practice, so we should use it as something to focus on other than school, something to take our minds off what happened that day. It helps me because I don’t have to just go home and sit there with all this free time, I know that I only have two hours before my next practice to get my homework done, and I’m much more diligent when I have stuff to do.

How have team sports benefitted you?

It has benefitted me in so many ways. Our team is not just an ordinary team; we are all best friends and it’s created relationships for a lifetime and I would have never met some of these girls without volleyball. Even though we may not have been a friend group outside of volleyball, volleyball has brought us together. Volleyball has also made me become a team player, learn how to face adversity, and learn how to be calm. We’ve had to deal with situations like teams wanting to beat us, bad refs, and everyone wanting us to lose, but we’ve learned how to handle them. Obviously, there will be teams that you’re just not going to mesh with and there will be different personalities that you should learn to get along with on the court and you must learn how to make a team work because it’s all about chemistry.

What advice do you have for girls who don’t know what sport to sign up for, or that aren’t naturally drawn to sports?

I would say that it is awesome to be involved in a sport and it gives you friendship for a lifetime, you learn how to deal with different people, it keeps you in shape, and it teaches you to work for a goal. I think that everyone should sign up for a sport and they shouldn’t be worried about making it because if I hadn’t decided on playing volleyball, my life would be way different than it is today.

What is next for you?

I considered playing college volleyball, but I’ve gotten hurt in the past seasons, so my body hasn’t been able to take it anymore since I’ve been going so competitively. I have decided that I want to go to the University of Alabama and focus on school and my career.

Thanks Emmy! It sounds like your sports career has led to a lot of success in your life. I wouldn’t be surprised if you’ve inspired some young girls already. We wish you the best of luck in college!

Sparkling Dresses but Inside We’re Messes: How an Aesthetic Sport Affected my Relationship with Food