Daphne Gives Up Her Identity 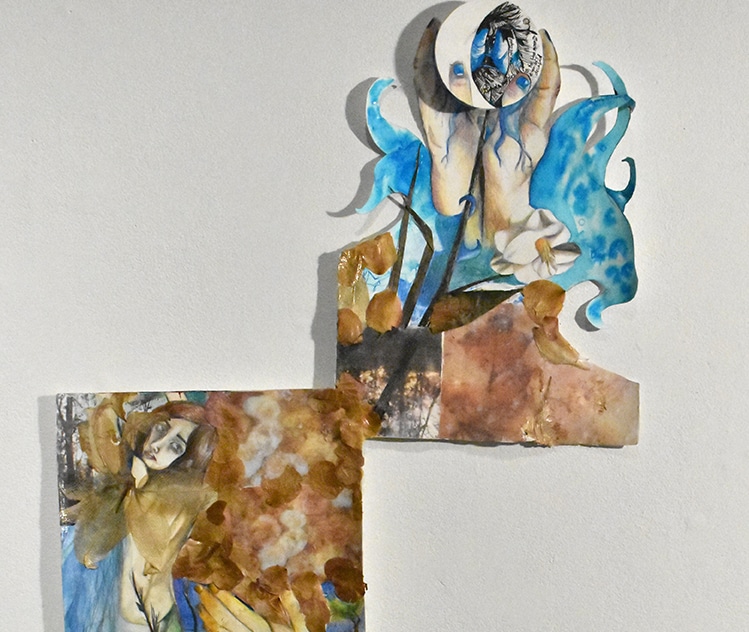 The classical myth of Apollo and Daphne is the tale of Daphne’s desperate decision to give up her humanity and personal identity in order to protect her life and body from the unwanted advances of Apollo, god of the sun. The story is traditionally seen as tragic because of Apollo’s loss of the woman he loves due to his own foolishness. Apollo boasted that the archery skills of Cupid, god of love, were inferior to his own. In revenge, Cupid shot Apollo with a golden arrow that made him fall in love with Daphne, the daughter of a river god. Cupid shot Daphne with a lead-tipped arrow that made her impervious to all feelings of romantic love, which inspired her to pledge herself to Apollo’s sister Diana, the eternally independent virgin goddess of the moon. Apollo pursued Daphne until at last she called on the help of her father to escape from his attentions. In answer, the river god transformed his daughter into a tree.

In my interpretation I have given Daphne more agency and focus. Daphne chooses to become a tree and sacrifice her identity in order to protect herself. This situation is all too common in the real world, where many people—girls and women especially—are often forced to hide who they are and conform to societal expectations or face terrible consequences. Daphne’s selfhood is represented here in vivid blue and is closely tied to water, the agent of her metamorphosis. The blue is slowly buried beneath vegetation as Daphne decays. The chronological order of this piece may be read from the top, in which Daphne holds out her sense of identity to the moon, to the bottom, in which she transforms in body and spirit to escape the hand of the sun god.

Digital Artwork: Down The Street

Poem: Out and Back In

You Can Do Anything