A Table for Two 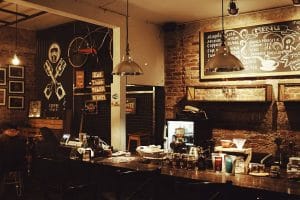 He knew it was a mistake to smile at her. He realized it as soon as he sat down. She was much too pretty for him. Much too bubbly and smiley. There wasn’t enough of him to fill her up, he thought. If her eyes are anything like her soul, she is bottomless. Though she sat across the coffee shop, he was sure that she had noticed him; The shop was small. If he moved his chair an inch backward, it would hit one of the chairs at the table behind him. Come to think of it, it was shocking that he hadn’t seen this girl before. This town was tiny and new people were few and far between.

He wasn’t especially attractive, but people told him that his personality made up for it. He hoped that she could tell, though he knew that in reality that would have been impossible. Glancing again at her table by the window, he stealthily watched her take dainty sips of her incredibly frothy (what he assumed) was a latte, the foamy milk clinging to her upper lip. He imagined carefully wiping it off with a napkin, and shivered with the thought of being so close to her.

There had been girls before. One girl, actually. She was very different from the one in the coffee shop, but lovely nonetheless. Within moments of seeing her, he had fallen. Hard. He spent all of high school chasing after her, but the pursuit had been fruitless. She went off to college, and he stayed local. The chase was over; She had won. Since then, he had written off love. It was forbidden, not worth his time. If he was alone for life, so be it.

But here he sat. Falling again. Up until the moment she walked in, everything had been normal. He went to this coffee shop every morning. He loved talking to the other locals at the start of each day. He loved drinking his scalding black coffee and taking small, slow bites of his everything bagel with cream cheese. He loved the reliability of his routine, the consistency of his predictable life.

It was the perfect day for love, he realized. Leaves swirled outside in the cool autumn breeze. The street bustled with people going about their own predictable morning routines. It was warm inside the coffee shop, and he loved the way the sweet aroma of baked goods and steaming drinks enveloped him. He wondered if she liked it, too. He wondered what had brought her here.

He briefly considered asking her to sit with him. The shop was beginning to clear out from the morning rush, and his window of opportunity was wide open. Maybe he would wait another minute. Maybe then his nerves would calm down.

Coming into this coffee shop was the product of sheer luck. She was traveling for her internship, and had an opening in her schedule on her last day in town. After randomly Googling coffee shops in the area, she had ended up here. She couldn’t believe her good fortune.

This town was the exact kind of place she wanted to be in. Far from home, first and foremost. But small. Quaint. It had character and charm, and now, the best oat milk latte she had ever tasted. Maybe it was time to reconsider where she was deciding to spend her college years.

She spotted him the moment she walked in. Though he wasn’t exactly her type, something about his eyes intrigued her. Slight wrinkle lines around his chin led her to conclude that he laughed a lot. Cute.

She tried to peer into his coffee cup, but it seemed to be empty. You can tell a lot about a person based on their coffee order, she remembered her father telling her. She would have to learn another way.

Boys had never been high on her priority list. She had been in relationships before, but all had been fleeting. Her friends wanted boyfriends and she was expected to feel the same. After high school, the pressure to conform was off. She had been alone ever since.

After stealing countless glances over her mug, desperately attempting to read his personality, she decided that the only option would be to walk up and speak to him. She began to rise from her chair, hands trembling as she placed her eggshell blue mug down on the rickety glass table.

Seeing her stand, he began to panic. So she hadn’t noticed him, after all. She had finished her coffee and was going to leave the shop, disappearing into the world outside, never to be seen again. The thought was too much to bear. He stood up, too.

She saw him stand, and momentarily pressed pause on her act of bravery. Was he leaving? Going to the bathroom? Getting a refill on his coffee? Maybe now she would be able to see what kind he was drinking.

He walked forward with purpose. Hoping beyond hope that he looked confident and manly, he willed himself to keep putting one foot in front of the other until…

He was standing over her, taller than she expected, and his neatly ironed khaki pants showed off what seemed like miles of slender legs. She looked upward, eyes wide.

“I know you just had some, but would you like to get coffee?”

“I was just about to ask you the same thing.”

hi! my name is marin, and i am a rising senior at homewood high school. i love to read, write, run, bake, and hike. my favorite color is forest green, and i am currently obsessed with kombucha and ranch fries:)