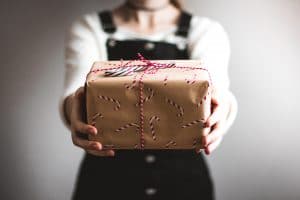 The holidays are often celebrated with a large gathering of family and friends. But what’s Christmas without the presents, am I right? Instead of simply placing your gifts under a tree, let’s add a little sparkle and discuss a few fun ways to say thanks to those you love most!

White Elephant is a classic gifting game that I’ve played every year and never gets old. Everyone must have a gift that is completely wrapped, and they may bring something that is either very attractive or the complete opposite. For example, you may walk in ready to give away a luxury purse while your best friend shows up with a bag of peanuts. Anyways, how the game works is that everyone places their gift in a pile. Then, small pieces of paper are to be numbered starting from 1 to however many guests there are. After doing so, everyone draws a number from a bowl full of the small slips of paper.

Whoever drew number one gets to go first and pick up any gift they want from the pile. Then, they must open it in front of all of the guests and sit down. Number two can either pick a new present from the pile or steal number one’s. This pattern continues until everyone has gone and all the presents have been opened. However, a gift may only be taken three times before it’s considered a “dead gift.” A dead gift is basically a present that can no longer be stolen. Additionally, you are unable to get rid of a present you dislike unless someone steals it from you! If you’re looking for a fun way to celebrate Christmas (and maybe make a few frenemies), this game may be the one for you!

Secret Santa is a rather traditional way of gift exchanging during the holidays. Everyone has their name written on a piece of paper and placed into a bowl/ hat. Each person then takes turns drawing a slip of paper until everyone is paired. The person you drew is who you will be purchasing a gift for. Identities aren’t revealed until the day of the party! If you’re looking for a simple way to build stronger bonds with your friends, consider Secret Santa.

Stand Up If is a game that I’ve recently learned last Christmas. Everyone is gathered in a circle in the living room and has their present with them. The host will have pre-written prompts that more than one guest can relate to. The prompts would contain something like “Stand up if… you have a pet fish.” If the statement applies to you, you stand up. Everyone who stood up exchanges gifts with someone else who is also standing. The cycle goes on until each person has traded presents at least once. When the game is over, everyone opens the present they ended up with!