The Kyle Rittenhouse Verdict has Everything to do with Race 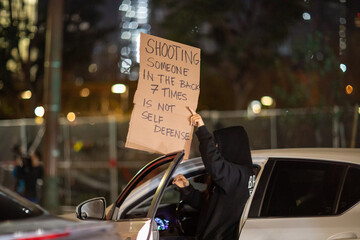 This is what sparked the demonstrations in Kenosha, Wisconsin, in August of 2020. These demonstrations started peacefully but as more people crowded the streets it became unrestful, so Governor Toner Evers sent members of the National Guard to assist local officers in keeping “control” over the protests. However, some people decided that the city of Kenosha needed more help to “keep” law and order. Kyle Rittenhouse was one of those people. He came from his residence in Illinois, 20 minutes away from Kenosha, to “assist” the guards. He carried a military-style semiautomatic rifle with him. Before the protests, he added loads of posts on social media with messages like “Blue Lives Matter!” He came to Kenosha because he thought he could be of help to the National Guard, and inevitably he incited violence and then cried self-defense when he “felt” threatened at the cost of 2 lives.

He shot and killed two people, and wounded one other. He says that he felt threatened by the three people he shot, so he took to using the weapon by his side. He was charged with five felonies and a misdemeanor, including two counts of first-degree intentional homicide. The homicide charges carry a sentence of life in prison. The jury found Rittenhouse not guilty on all five charges. The parents of one of the victims, Anthony Huber, said this about the verdict, “It sends the unacceptable message that armed civilians can show up in any town, incite violence, and then use the danger they have created to justify shooting people in the street.”

Jacob Blake’s family attorney, Ben Crump, said, “I just think that right now in America, there is this notion that certain people have the right to solve every disagreement with a gun.”

This case and its verdict further solidify the idea that white men are able to do what they see fit and avoid the consequences of their decisions. If Kyle had been a black man, no one would have believed his claims of self-defense. Everyone would ask what he thought would happen bringing a semiautomatic rifle to the protest. Everyone would claim that he was the main threat in the event. This case highlights the disparities between how our justice system treats black people versus white people.

Those who support Kyle Rittenhouse are the same people who claim that Jacob Blake was a threat to officer Rusten Sheskey. Officer Sheskey and two other officers attempted to take Blake into custody on an outstanding warrant. He refused to go with the officers, and during the scuffle, a pocket knife fell out of his pocket. He picked up the knife and was going to put it away. Blake claims that he was going to surrender after putting the knife away. But officer Sheskey shot him 7 times in his back before he could. After he was rushed to a hospital, police handcuffed him to his bed. A black man with a pocket knife going against three fully trained police officers with guns and tasers was labeled and established a threat, while a white man with a military-style semiautomatic rifle going up against two unarmed men was labeled someone acting in self-defense.

This verdict is yet another step back in the American justice system. People are hurt to hear those that claimed they supported the Black Lives Matter movement, show support for this verdict. This case is another example of how racism is embedded into ALL of our systems. We have to keep educating ourselves and our communities to get people to understand this. We have to keep questioning those in authority to get them to understand the suffering in minority communities.

Sleep Disorders Every Teen Should Know About