Review: To The Bone 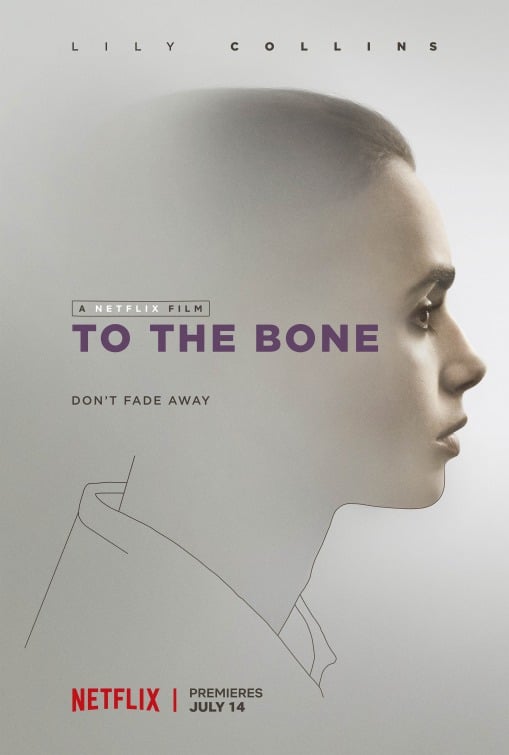 On July 14, 2017, Netflix added a new movie, To The Bone. The movie follows 20-year-old Ellen, later known as Eli, who is battling anorexia. The film deals heavily with eating disorders of all types, suicide, and dysfunctional families. There is also a miscarriage scene due to an eating disorder. It is rated TV-MA, and other warnings include lots of swearing and images of emaciated bodies.

Overall, I found this film to be very realistic, unfortunately. It is not a very cheerful movie. It is hopeful towards the end, but throughout the movie it is not happy. That is kind of a good thing, though, because Eli is not happy either. If the movie framed her struggle in a more cheery fashion than Eli felt, it would feel way too fake.

I will do my best to discuss this film without spoiling the main plot points, but there are a few minor spoilers in the rest of this article.

Eli’s family was extremely dysfunctional but, again, in a depressingly realistic way. Her dad is never around, to the point that he is not shown in the movie. Her stepmother tries too hard but does not understand her. It’s revealed that Eli’s mom has not always been there for her daughter, having moved to Arizona abruptly with her girlfriend at one point and essentially left Eli behind. Eli’s half-sister Kelly is the only family member that is shown to truly like and care about her. Eli’s doctor backs this up after a family therapy session, saying Kelly was the only one to have something to say that wasn’t entirely self-serving.

The vibe that the members of the house have is nice. They all throw a baby shower when one house member (Megan) reaches the 12-week period of her pregnancy, and give her presents. They try to support each other, and the only boy (Luke) and Eli start flirting.

The worst part about the movie is that we have to watch as Eli has to hit rock bottom. Sometimes people will not accept help until then. She is very near death when the movie is heading towards its end, and it is heartbreaking. It is definitely not a movie that is sugar-coated. But it is also definitely hopeful at the end. This makes sense, because it is largely based on the director’s struggles with anorexia early on in her life.

Overall, I’d give the movie 7.5/10 stars, partially due to the fact that we’re supposed to find Luke endearing but his “charming” qualities came across as obnoxious and annoying to me. It was still a good movie, though. I imagine it would be extremely difficult to watch if anyone’s struggled with eating disorders themselves, though, so take that into consideration before you watch it, and as always take care of yourself first.

Labels We Live By