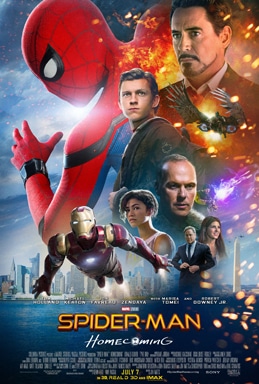 The latest reboot of the Spider-Man movie franchise premiered in July. As someone who had been skeptical about this remake, I am willing to say that I was completely wrong. Tom Holland as Peter Parker is perfect. The movie overall was charming. By the end, you couldn’t help but want to root for Peter. It left me wanting so much more, but in the best way, not like there wasn’t enough in this film. There was definitely enough going on, but not too much. It just left me wanting more Peter Parker, like I can’t wait to see him in the next Avengers movie and I’m already waiting for the next Spider-Man movie.

Zendaya as Peter’s classmate Michelle Jones was hilarious, quirky in a good way, and intriguing. She’s awkward, but in a way that seems real, not like she’s putting it on to seem cute. She’s the weird girl, and the best part about that to me is that no one tries to change that. She’s also a bit into social justice, pointing out that the Washington Monument was built by slaves and mentioning that she wants to “get some light protesting in” at one point. Michelle felt real to me, and it was awesome.

Laura Harrier as the love interest, Liz, was much better than I expected. I tend to have low expectations for love interests in movies like this, because they honestly usually aren’t given much to work with. But Liz was nice, sweet in a way that seemed genuine, and driven. Sometimes in movies, especially in superhero movies, we see the love interest and she’s the mean girl. We’re supposed to root for her to be with the main character, but many of us are left wondering why. Well, there is definitely not that problem in this movie. She’s a great girl and you definitely want her to be with Peter in the end.

Last but not least, who can forget Marisa Tomei as Aunt May? There was a lot of outcry when it was first revealed that she was playing Aunt May, before the movie Captain America: Civil War came out. Most people were angry because she was way too young. It’s true that Marisa Tomei looks like she’s maybe in her late 30s, even though she’s 52. People were mad, because with each Spider-Man reboot, Aunt May has gotten younger. But I loved Marisa Tomei in this. It was very clear that Aunt May cared for Peter like he was her own. She was goofy and fun with him, but also genuine and, honestly, heartbreaking in the scenes that required it.

All in all, I found it refreshing to see so many female supporting characters who are treated so well. The actresses definitely delivered in this movie, and I can’t wait to see what Marvel has next for them in the upcoming Spider-Man movies.

Review: To The Bone