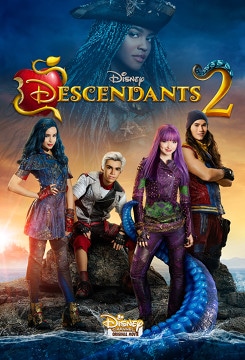 On July 21st, Disney Channel’s newest movie, Descendants 2, aired. This movie is a sequel to the 2015 Disney Channel Original Movie (DCOM), Descendants. Descendants was a movie about the children of Maleficent, Cruella De Vil, the Evil Queen from Snow White, and Jafar. In this universe, all the Disney villains and their families are locked on the Isle of the Lost together, while the good characters and their families are in the United States of Auradon. Prince Ben, the son of King Beast and Queen Belle, invites Mal (Maleficent’s daughter), Carlos (Cruella’s son), Evie (Evil Queen’s daughter), and Jay (Jafar’s son) to come to Auradon. From there, the movie has plenty of shenanigans and sweet moments. Many people loved Descendants, so they wondered: would Descendants 2 be as good as the first one?

Well, I can’t speak for all people who watched it, but I definitely believe that Descendants 2 was just as good as Descendants. Without spoiling anything, I’d say that the songs were catchy and fun, the plot line was great, and the new characters were compelling.

In the new Descendants movie, Mal is cracking under the pressure of being King Ben’s girlfriend. Soon, she returns to the Isle of the Lost, and runs into an old rival, Ursula’s daughter Uma. It is difficult to get into the rest of the plot without spoiling the movie, but it’s a fun ride.

Personally, I found this sequel to be much more fun than the first Descendants movie, and I was a big fan of that movie. This movie feels more sophisticated, in a way, more like a movie that would be released in theaters than a DCOM. The vibe of DCOMs generally differs from theatrically released films. That is not a criticism, but it is what I have observed over the years. This film felt more cohesive and put together than the typical DCOM does, like the whole movie was more elaborate and the crew put more work into it.

Descendants 2 had one less song in the movie than Descendants itself had, and somehow it felt like it was lacking in that area. That would be my biggest criticism of the movie overall. Another criticism would be that Gaston’s son Gil felt underdeveloped, but there were so many characters in the movie that I will let that one slide.

I still enjoyed the movie, though, even with those criticisms. Drizella Tremaine’s daughter Dizzy was a new character who I particularly enjoyed. She and Evie have such a nice sisterly relationship, and Dizzy is adorable besides that. She definitely added a fun element to the movie.

Overall I’d give the movie an 8/10 stars. There’s room for improvement, but it was still really fun and enjoyable. I hope that there will be a third installment in the series as well.

To Be or Not to Be