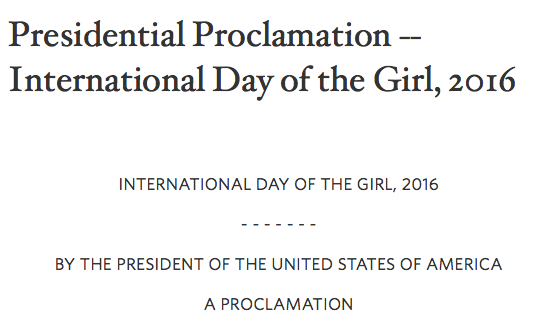 INTERNATIONAL DAY OF THE GIRL, 2016

BY THE PRESIDENT OF THE UNITED STATES OF AMERICA

No matter where she lives, every girl on this planet deserves the chance to learn and grow, to develop her mind and her talents, and to live a life of her own choosing. Although we have made life significantly better for our daughters than it was for our mothers and grandmothers, in too many parts of the world, girls are still undervalued, disrespected, abused, and prevented from contributing to society. On International Day of the Girl, we recognize our obligation to lift up women and girls at home and abroad and to build a world where all girls feel safe and empowered in their classrooms, their communities, and their homes.

My Administration is committed to combating gender disparities, and through the White House Council on Women and Girls, we have made it a priority to consider the needs of women and girls in our policies, laws, and programs. Today, more American women have the freedom to make their own choices about their lives — about their bodies, their education, their career. The Affordable Care Act has ensured that more girls have access to quality, affordable health care and that no health insurer can charge them more simply because of their gender. By encouraging the media to depict more examples of women in science, technology, engineering, and math (STEM) fields — and by working to expand access to STEM classes and careers, particularly computer science — we are striving to address inequalities in education. We will continue to pursue policies that advance gender equality here at home, from equal pay for equal work to protecting reproductive rights, because while some girls have never had more opportunities, there are still many who remain in the toughest of circumstances.

Under the leadership of Vice President Joe Biden, we are working to put an end to violence against women, and we have launched a movement to fight sexual assault and support survivors. Through the White House Task Force to Protect Students from Sexual Assault and the “It’s On Us” campaign, we are shining a light on the unconscionable rates of sexual assault against teens and young adults in primary and secondary schools and on college campuses. My Administration recently announced new guidance and resources to help district administrators and educators prevent and appropriately deal with sexual assault in K-12 settings. We have also provided guidance to educators on ways to address harassment and discrimination of students in school settings, including transgender girls and women — who too often face bullying and abuse that harm their education. The Department of Justice also released guidance to identify and prevent gender bias in law enforcement responses to sexual assault and domestic violence cases. And because 84 percent of American Indian and Alaska Native women and girls will experience some form of violence in their lifetimes, we have protected the ability of tribes to prosecute non-Native perpetrators of domestic violence in Indian Country through provisions included in the 2013 reauthorization of the Violence Against Women Act.

As we work to expand opportunities here in the United States, we must also look abroad and acknowledge that any country that oppresses half of its population — that prevents women and girls from going to school or work or refuses to give them control over their bodies or safety from gender-motivated abuse — is not a society that can thrive. The ideologies that harm girls and prevent them from fulfilling their potential are the same ideologies that have led countries to instability, violence, and terrorism. That is why earlier this year, we launched the U.S. Global Strategy to Empower Adolescent Girls — a strategy aimed at bringing Federal agencies together to comprehensively improve the lives of girls around the world, safeguard their rights, and encourage their full social, political, and economic participation. To specifically focus on the challenge of adolescent girls’ education, First Lady Michelle Obama and I launched the Let Girls Learn initiative, through which we are working with companies, organizations, and foreign governments to help give adolescent girls around the world the chance to go to school — because a world in which all girls have access to an education is a safer, fairer, and more stable place. The initiative includes more than a billion dollars for funding new and ongoing programming in more than 50 countries to help adolescent girls attend and stay in school. And the White House will soon host the first meeting of the North American Working Group on Violence against Indigenous Women and Girls to champion regional coordination on the rights of women and girls from indigenous communities across North America.

Around the world — from Africa to Southeast Asia to Latin America — we are striving to improve girls’ welfare, build their skills, and promote their participation as the next generation of leaders. We are working to prevent and respond to violence against women and girls in fragile settings as well as support refugees and displaced persons around the world. We are undertaking targeted efforts to address child, early, and forced marriage, and we are investing in new programs, including survivor-led programs, to end female genital mutilation and cutting in seven countries across Southeast Asia and West Africa. In sub-Saharan Africa, we are helping adolescent girls pay for and attend school, while ensuring they learn about HIV and violence prevention. We have sponsored “Women in Science” camps in Peru and Rwanda to give girls abroad the opportunity to learn how to use technology to improve their communities. We are also working with Pakistan to advance women’s economic participation and entrepreneurship and launch the country’s first “Take Your Daughter to Work Day.” And we remain committed to ending human trafficking and have taken unprecedented steps to provide comprehensive services to victims, bring traffickers to justice, apply new technologies to combat modern slavery, and provide training and promote awareness at home and abroad.

This summer, 5,000 leaders from around the world gathered at the first ever United State of Women Summit to highlight the work we have done and to build an agenda for the future. But we know there is still more to do, and I have made advancing gender equality a foreign policy priority to ensure we can continue removing barriers that prevent women from reaching their full potential. More than our policies, we must commit to changing the culture that raises our daughters to be demure or criticizes them for speaking out — and to changing the attitude that permits the routine harassment of women and girls, whether walking down the street or going online. We are working with communities and businesses that are rethinking workplace policies, funding women entrepreneurs, expanding female leadership, and creating more opportunities for women and girls who too often face disproportionate challenges — including women and girls of color, women and girls with disabilities, and lesbian, bisexual, and transgender women and girls — because everyone has a role to play and everybody deserves the chance to pursue their dreams.

This is the future we are forging: Where women and girls, no matter what they look like or where they are from, can live free from the fear of violence. A future where all girls know they can hold any job, run any company, and compete in any field. Today, we recommit ourselves to the belief that when everyone has the opportunity to go to school, explore their passions, and achieve their dreams, our communities are stronger, more resilient, and better positioned for peace and prosperity. Let us keep working to build a world that is more just and free — because nothing should stand in the way of strong girls with bold dreams.

NOW, THEREFORE, I, BARACK OBAMA, President of the United States of America, by virtue of the authority vested in me by the Constitution and the laws of the United States, do hereby proclaim October 11, 2016, as International Day of the Girl. I call upon the people of the United States to observe this day with programs, ceremonies, and activities that advance equality and opportunity for girls everywhere.

IN WITNESS WHEREOF, I have hereunto set my hand this seventh day of October, in the year of our Lord two thousand sixteen, and of the Independence of the United States of America the two hundred and forty-first.

Article From: The White House

The Art of Losing Creativity