My Trip to Italy: An Insight on the Future of Food 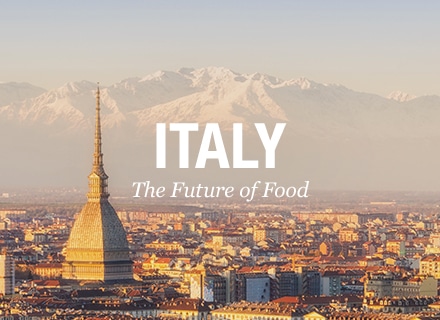 My trip to Italy is one that I will not soon forget! I was exposed to many things – a new culture, a new location, new smells… but most importantly, I was exposed to a new way of viewing food. Most of us in America pop food in our mouths without taking a second to consider where it comes from, what ingredients are in it, if the way it was made damaged the environment at all, or if it could possibly even be making you sick. In Italy, however, things are almost the opposite. For the most part, restaurants and ordinary people in Italy are much more conscious of the details of their food. For example, when we were eating at a place known for their traditional pizzas, we asked the owner where he gets the cheese from. He immediately gave us directions to a local mozzarella farm where his business gets all of their cheese. It was less than 15 miles away! We then went to the mozzarella farm, where we found lots of cows and cheese being made. I immediately noticed a difference in how dairy cows are treated in Italy versus how they are treated in America. At the cheese farm in Italy, the cows were roaming a grassy field, being fed grass and hay; meanwhile, if you visit a dairy farm in America, you are likely to witness cows stuffed back to back in an area that is way too small for them, being fed nothing but corn. All the cheese tasted incredibly fresh- not processed or packaged at all. Imagine if all restaurants and grocery stores in America could tell you exactly where they got their food from.

Next, we visited an organic lemon grove. This lemon grove produced more than just lemons, however, they also produced oranges, olive oil, and honey. And all of it tasted absolutely divine! None of it tasted like what I was used to it tasting like! It was truly an experience that changed my life. When I asked one of the farmers why they taste this way, he told me it was because their farm refused to put any pesticides onto their plants, and instead use entirely organic methods of farming. When I asked him why they did this, since the alternative was obviously much easier, he simply said that it is because it is healthier for the consumer, and that is the top priority of their farm. He then invited me to eat full slices of lemons – peel and all! I was hesitant at first, but after I did, I immediately went in for another. The lemons were so fresh! And the peels were not bitter and waxy to eat! It really shows you what a little extra care for a crop can change.

We then later went to a three-day summit where we delved into the problems of food even deeper. We discussed how food affects the environment, culture, technology, health and wellness, and the economy. We then all split into teams and all came up with new innovative ideas to address these problems. It was overall an incredible experience where I learned a lot and changed many perspectives that I had about food. We also had the honor of meeting and listening to three amazing guest speakers – Stephen Ritz, Raj Patel, and Anthony Bourdain. All who had very different and interesting approaches to food. Stephen Ritz, who is a school teacher from the Bronx, noticed how unhealthy his students were becoming. He realized that the environment, and the food options, that his students were growing up with were unacceptable. He decided to take matters into his own hands and created a school garden that the students would help take care of, urging students to make better food choices by eating what they grow, instead of relying on processed “foods”. The results were incredible, more and more students started attending school, and more and more kids were getting healthier instead of becoming sicker. But Mr. Ritz didn’t stop there, he then continued making more and more gardens to install in the rest of the community, making The Bronx look greener, and directly affecting the community’s morale. Just by using the power of plants, Mr. Ritz was able to turn a school that hardly had an attendance, into a community with a goal of making the world greener.

Our next guest speaker, Raj Patel, was a scholar in public in public affairs, and he has written many books on the topic of food justice. He offered amazing insight on how food problems across the world are all connected by some of the same rooted problems. He told us how in order to solve food problems for the long term, it is going to take more than just shipping food. In order to solve a problem for one issue, it requires attention to all issues. He also has an exciting series of documentaries coming out very shortly that talks about these ideas. One of his quotes that really stuck with me was, “Food will not end hunger. Change to access to food will

And lastly, our guest speaker Anthony Bourdain is one that is widely known. For those who do not know, Anthony Bourdain is a celebrity chef who is known for his shows “Parts Unknown” and “No Reservations”, where he goes to exotic locations and tries the traditional foods of that culture. In his speech, he discussed how food is apart of the culture. About how, when you are going to another country and trying a dish of that area, you are consuming a piece of their culture. Their family. What their grandmother’s made them. And about how dishes that contain foods that we aren’t accustomed to, such as bugs and snakes, are not weird but are just different.

My favorite quote of his was, “It is easy to go into another country and see something abhorrent by our standards and try to correct them. The conversation ends there.”

This was truly an experience and an opportunity that I will never forget! The knowledge and realizations that I have gained through this immersive trip are some of the most valuable tools that I will have on changing my community back at home. I cannot wait to bring the people of Birmingham this amazing insight! Si se puede!

Spirit of the City