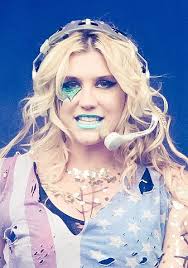 The pop star Ke$ha transformed from a smeared eyeliner, glitter throwing hot mess into an icon for sexual assault victims after she fought her predator and powerful producer, Dr. Luke in a very public dispute. Emerging from the aftermath of the court battle and backlash, Kesha revealed a deeper side to her musical talent and a stronger side to her own persona that can’t be found in the lyrics of her first hit Tik Tok. When Kesha released the single “Praying”, it was a harmony that resonated with former sexual assault victims and fans alike. It was lyrical nod to the difficulties and pain she had endured in the aftermath of her rape and court case. Many only sung the highest praises over the single and it not only became a hit, but a reminder of her strength.

In the midst of the transformational #MeToo movement, Kesha sang her single “Praying” at the Grammys. Kesha was in the spotlight reminding her abuser what she had overcome and both the crowd and Twitter felt the powerful ballad. It was the most tweeted about performance during the Grammys and it was unanimously assumed a Grammy was on the horizon for Kesha later that night.

However in a pivotal twist, Ed Sheeran ended up taking home the Best Pop Solo Performance Grammy for his single Shape of You. While Shape of You is definitely an upbeat pop tune, many didn’t think it edged anywhere close to the degree of Kesha’s Praying. After the snub, many took to social media to ponder what caused Kesha to turn up empty handed after she wrote a song about how she clawed her way out of rock bottom.

It appeared that a majority of the negative reactions to Sheeran’s win correlated with the fact that Kesha’s song is symbolic for such a groundbreaking time. “Praying” is the embodiment of the Time’s Up movement and Kesha is one of the frontier’s for speaking out against her abuser; the award would have aligned perfectly with the propelling movement.

But Kesha still has her happy ending with a smash hit, a Grammy nomination and above all, avenging her abuser.

Jumanji: Welcome to the Jungle

New Year’s Resolutions and a Lesson on Self-Love