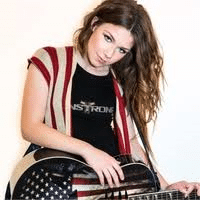 Ciera MacKenzie is a 16 year-old rising country star, living in Nashville, Tennessee, with a knack for playing the guitar and songwriting. She got her break at twelve years old, when singing at a local music store in her hometown of Cache, OK, where she had been taking lessons. At this talent showcase, the owner of the music store told Ciera there was a recording studio where he’d like to record with her, if she had any originals. Luckily, she had four notebooks full of songs. After four months recording, Ciera had her first album. After making a music video for one of her songs, Volunteer Soldier, and releasing it on YouTube, Big and Rich wanted her to open for them. Since then, Ciera has felt a strong passion for performing and has been travelling back and forth across the U.S. Recently, she has found her roots in Nashville, TN and is working on her newest album with Will Edwards and Kenny Olson. I found myself extremely interested in Ciera’s story because I always loved performing on stage as well, and I love seeing Ciera’s unique story as a success. Ciera also told me that she is sponsored by Gibson Guitars and is endorsed by Boss and Roland, KILLER Q guitar straps, Gunstrong, Worn and Branded, and Harvey and Sons Tea. Wow! I was already very impressed by Ciera, but I still wanted to learn more about her. Here’s how I got to know Ciera in a little better way.

M: Where do you hope to be in five years?
C: I hope to have a record deal and be selling out stadiums. It’s what I’ve been dreaming about since I was 10! I hope to be happy above all things. If you don’t love it you shouldn’t live it.

M: Are you going to a traditional high school in Nashville/Nashville area?
C: I’m homeschooled. So I do my homework in my pajamas 🙂 Day to day life for me always consists of working out, practicing my guitar, working on my education, writing songs, and spending time with my family.

M: How are you liking Nashville so far?
C: I’m completely in love with Nashville. It just makes me feel so creative. I can go anywhere any day of the week and play my guitar in front of an audience. I love the trees too. Oklahoma doesn’t have many trees.

M: Where are you originally from?
C: Speaking of Oklahoma that is where I am originally from. I grew up in a small town in Southwest Oklahoma called Cache. Population 2,000.

M: How has performing impacted your teenage years?
C: Performing gives me a creating outlet to just rock out. It’s like grabbing a hairbrush and singing in your mirror. Except the hairbrush turns into a microphone and the mirror turns into a big group of people. My teenage years I presume are a little different than most teenage years. I’ve been playing my guitar in smoky bars since I was 13. On Friday nights I’m not at the high school football game, homecoming dance, or the prom I’m chasing my dream. I know I’m missing out on the typical teenage life but I wouldn’t change it for the world.

M: Who have been some of your biggest supporters?
C: My biggest supporters have to include Kenny Olson, Rusty Harmon, the entire team at Harmon Music Management (they are just so amazing!), my whole family, my producer Will, and everyone that shows up at my shows. My sponsors are also very big supporters of mine they include Killer Q instrument straps, Boss/Roland, Taylor guitars, Worn and Branded Apparel, and Gibson guitars.

M: If you could give some advice to our GirlSpring audience about balancing teenage years with chasing after your dream, what would you say?
C: You have to out work everyone. You have to be willing to get up at 5:30 in the morning to go workout then practice your skills for 4-5 hours everyday. People should leave your performance weather it be a show or a game thinking “wow that girl was great!” There is a tremendous amount of competition and you have to be willing to put in the work and believe in yourself. Surround yourself with people that are encouraging and helpful for you as a person and for your career. As my girl TS say “the haters gonna hate”

I loved getting to know Ciera! Especially because she now lives in my hometown of Nashville! Ciera’s story inspires us all to follow after our dreams.

Quiz: Which Halloween Movie Should You Watch This Holiday Season?

Welcome to my Blog !