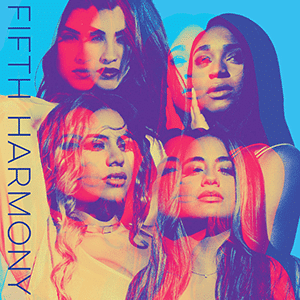 The girl group Fifth Harmony has their third album coming out this month, a self-titled one that features their single Down with Gucci Mane.

If you haven’t heard of Fifth Harmony, maybe you’ve heard of Normani Kordei, since the Fifth Harmony member was on Dancing With The Stars this past season and placed third with Valentin Chmerkovskiy. Or perhaps you’ve heard of Camila Cabello, who was a member for four years but left the group at the end of last year.

If they’re still not ringing a bell, that’s okay. The (now) four-piece got their start on The X Factor (US), where they got third place in the second season. Besides Normani Kordei, the group includes Ally Brooke, who, with ASAP Ferg was featured on the song Look At Us Now by Lost Kings; Dinah Jane Hansen, who auditioned for the role of Moana and was generally very supportive of the film, especially because she is of Polynesian (and Tongan) descent; and Lauren Jauregui, who has been featured on Marian Hill’s song Back To Me, and who did a duet called Strangers with Halsey for the album Hopeless Fountain Kingdom.

One thing I find important to note about Fifth Harmony is that all of the members are women of color. Besides Dinah Jane Hansen’s Polynesian and Tongan roots, Normani is African-American, Lauren is Cuban-American, and Ally is Mexican-American. The girls speak up about racism regularly, and that is pretty brave since that can lead to backlash. It is especially brave because they have all done it their entire careers.

In addition to this, Lauren Jauregui is bisexual and is no longer quiet about it, which is also really brave. The duet that she did with Halsey is actually about a same-sex relationship (as Halsey is also bisexual). The others have been supportive of Lauren being open about her sexuality.

That’s enough about the members, though; let’s move on to the music. Fifth Harmony’s music is in the pop and R&B genres. It’s also great if you want a bit of girl power, especially their older songs. (The girls make it clear that they are still all about girl power, but their songs have grown up as they themselves have.)

Some singles you may have heard include their first one, Miss Movin’ On; the song Boss (sometimes stylized as Bo$$), which, yes, is the one that mentions Michelle Obama; Worth It, which featured Kid Ink; and Work From Home, featuring Ty Dolla Sign, which is their highest charted song to date. There are plenty of other singles as well, but those are generally the most popular and most talked about ones.

There are high hopes about this next Fifth Harmony album, as their other albums have been really good and the members have talked about how they have grown on this album. The question will be whether the group can follow up their previous stellar releases with another great album, and we’ll find out soon enough.

Labels We Live By