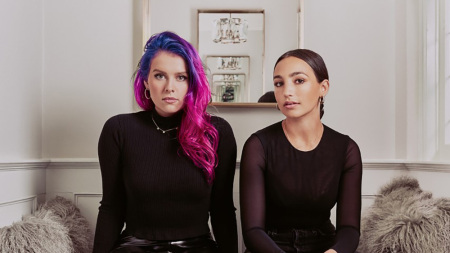 On December 25th, 2020, over 82 million hearts were stolen by the Netflix show Bridgerton. The Netflix romance is set in England during the Regency era and follows two main characters, Daphne and Simon, as they navigate the inner workings of marriage, love, resentment, and forgiveness. Think of the show as a combination of gossip girl and pride and prejudice.

On January 10th, 2020, those 82 million hearts were stolen once again by the creators of Bridgerton: The Musical, Abigail Barlow and Emily Bear.

It all began with one TikTok created by Abigail Barlow, a native of Birmingham Alabama. In this video, she sings a song she created from the perspective of Daphne. Barlow asks her audience the “What if Bridgerton was a musical?” and the fans of Bridgerton responded with a resounding yes!

Involving the World in the Process

Since then, Abigail recruited her composing counterpart, Emily Bear (a musical prodigy featured on Ellen), and they have been composing the musical ever since. The difference between this developing production and other famous musicals is its transparency and collaborativeness. Bear and Barlow have been live-streaming the majority of the creative process, therefore allowing fans of the production to watch the musical magically come to fruition. In addition, TikTok has allowed hundreds of other creators to contribute to the development of the musical.

No matter if you enjoyed, despised, or even haven’t watched Bridgerton, as girls, we should be inspired by the creative spirit and talent shown by these two artists. Abigail Barlow and Emily Bear are paving the way for young females to gain the self-confidence necessary to share their passions, ideas, and even possible musical pieces.

Check out the full Bridgerton: The Musical concept album on SoundCloud!

Behind on the latest TikTok trends? Check out this list of Things I Learned From TikTok.