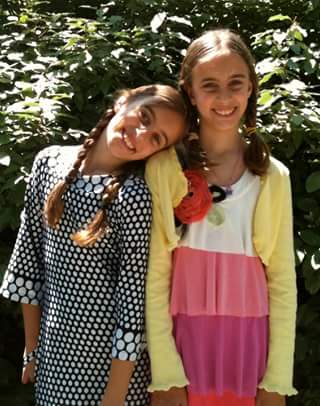 It was the first day of eighth grade, and my first day at a school separate from my twin sister. During an introduction “get-to-know-you” game in my first period class, I asked one of my classmates a question, recognizing him as an old classmate from first grade. When he recognized me, instead of greeting me by my name ‘Lily’, he greeted me as ‘Zoë’s Twin’. I am still at that school, and being apart from Zoë all day has allowed me to build up an identity of my own, but at that time I felt that I never would. We, Zoë and I, have noticed that creating an individual identity, in school or otherwise, is definitely made more of a challenge by having a twin sibling.
One reason finding our own identities was made a challenge to Zoë and I was because we were around each other most of the time, and we mostly spent time with just each other. We shared a room until around fourth grade, and still then we usually hung out in one another’s rooms until bedtime. Any of the friends one of us made quickly became both of our friends. Because of this, we never had the time apart from each other to grow our own personalities and identities. Now, as high school students in different schools, we hang out with different groups of people and are able to form our own identities and livelihoods.
Despite this, we share many common interests that we express differently. For example, I go to an art magnet school, so I have developed my artistic interests in painting and sculpture. Zoë takes photography classes at her school, so her artistic interest is more in digitally manipulating photos that she has taken. We also both enjoy sewing costumes and garments, but while I am more general in what I like to sew, Zoë’s costumes are usually worn with a petticoat and look old-fashioned. So, while we are both art-oriented in our hobbies, our interests in the particulars of the hobbies are different. This is also relevant in media, such as the genres of the shows and movies that we like to watch. Because we do like the same things, some overlook the differences in what we enjoy. This had, early on, made it difficult for us to make our own style and separate our interests. In fact, when we were younger, we would have child arguments about ‘who stole whose drawing style’, despite both of our drawings just looking like kids’ pictures. Now we have come a long way in that area, and we both like different things, but can both relate to each other’s hobbies.
It’s also very difficult for us to form our own identities because the public eye sees twins as a unit, not as two individual people. Sometimes when Zoë or I are somewhere without one another, the first question people tend to ask us is “where’s your sister?”. A countless number of people have asked me if Zoë and I will live together after college, and many friends of ours also feel obligated to invite both of us to parties or get-togethers, instead of just one of us. Obviously, this idea of twins being more of a unit than two separate people makes it difficult for us to create different images of ourselves.
While it is more difficult to find individuality as a twin, that doesn’t mean that being a twin isn’t fun. Being so similar also means that Zoë and I have a lot in common that we can talk about, and we can rely on that connection. We are best friends as much as we are sisters.