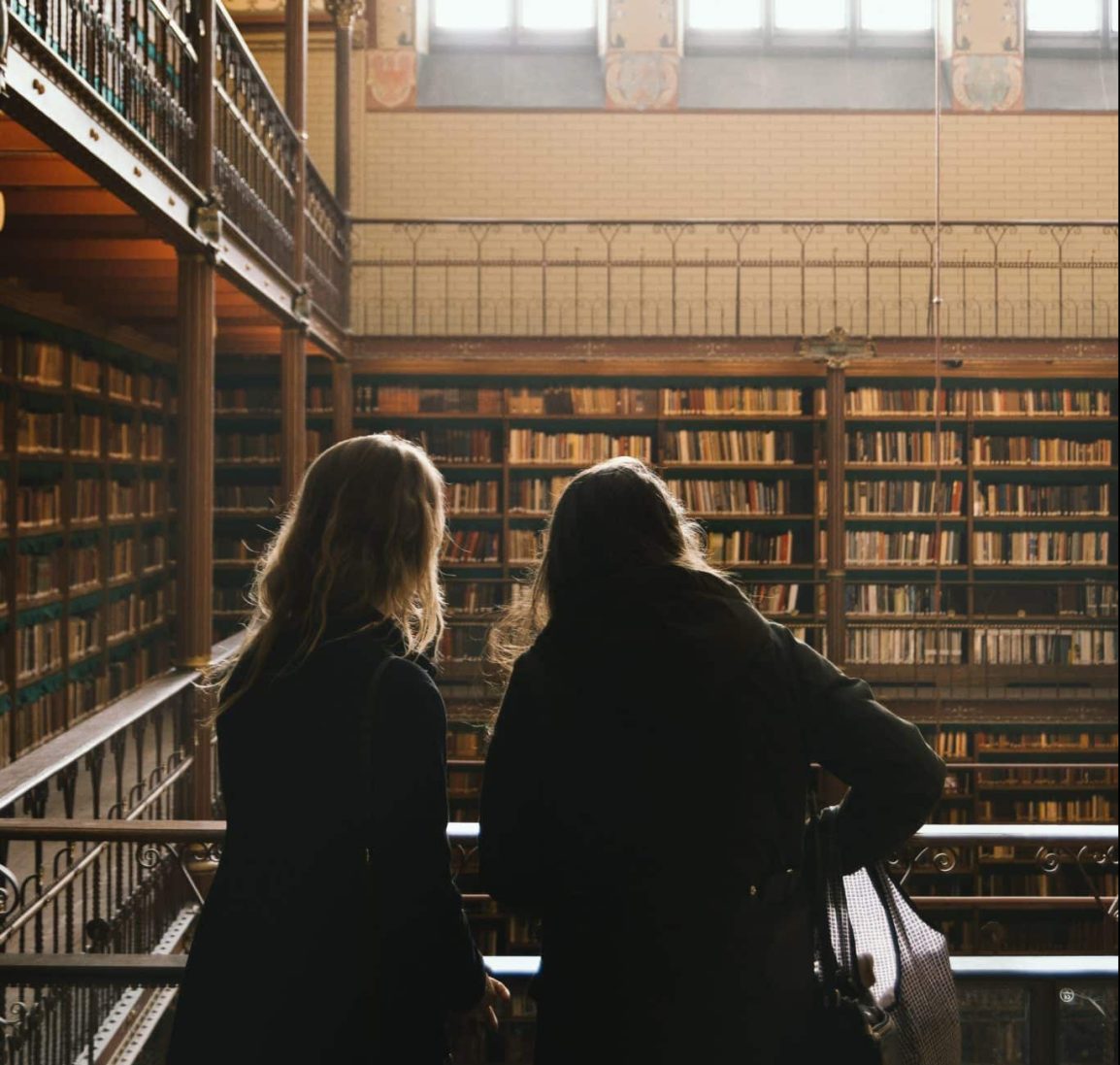 It’s officially fall, which really means it’s dark academia season. The leaves are changing color, sweaters finding their way out of the back of our closets. Your mom just bought hot chocolate mix from the store and Halloween is right around the corner. Your shoes have just evolved from sandals to boots and you’re wondering how to stop the static in your hair when you brush it.

We all have our own ways of getting in the fall mood, but nothing ever seems to top reading a good book, watching a fall movie, or getting invested in a TV show.

Without further ado, here’s my list of the best books, movies, and TV shows to watch this year to get an autumn or dark academia vibe.

This movie was released quite recently (2019). It is an exciting story that takes place in winter, but simultaneously radiates that dark academia and fall feel.

The story follows a detective trying to solve the murder case of an incredibly wealthy old man. He investigates each member of the family, close friends, and staff members in an attempt to piece the murder together. The movie is fun and light, the family hilariously dysfunctional and the plot twist at the end actually somewhat unexpected.

This wholesome, tear-jerking movie takes place during fall and tells the story of an unwealthy kid, who ends up being a mathematical prodigy. The story is about the main character (Will Hunting) finding his identity and letting go of the things holding him back, through the help of his court-ordered therapist (played by Robin Williams).

The movie is sweet and wholesome, but also realistic and discusses some pretty important themes. It is the perfect sentimental movie to watch on a foggy autumn day, curled up on your sofa, and drinking hot chocolate.

For all the rom-com lovers out there (myself included), this is not only one of the most well-known rom-coms of all time, but it perfectly captures the fall vibe. The trope of this movie is friends to lovers and it tells the story of two young college graduates who end up in a car together and they argue whether or not men and women can really ever just be friends. After this argument, they run into each other multiple times throughout the years. This story depicts the importance of establishing a firm friendship before pursuing love with someone.

Almost every time Harry and Sally meet up during the year, it is during the fall, Sally is dressed in her heavy knitted sweaters and hanging out at a cafe. The movie is cozy, warm, comical, and sweet and wrapped together.

This list is incomplete without this movie, one that feels so autumnal and captures that dark academia feel. The movie is truly a phenomenal one and its main message is “Carpe Diem,” which means “seize the day,” something the teacher reiterates many times throughout the course of the film. This movie tells the story of an English teacher who tries to push his students to be unapologetic and inspires them through his teaching of poetry. He pushes them to be themselves, rather than try to squeeze into the box of societal norms. The movie has an important message and it tells and beautiful story.

The list is incomplete without this classic. Coraline is the perfect spooky movie. It is not full-on horror, and while it intrigued me more than it scared me, I have friends who still have to watch parts of this movie with their eyes closed. Coraline is a cartoon movie and while it isn’t as tear-inducing or influential as the other movies here, it would be criminal to neglect this film.

Coraline is about a young girl, named Coraline, who has recently moved to a new home. As she explores her new (and somewhat spooky) environment, she find a closet in her home that leads her to an alternate reality that is the same as her own, but some aspects of it are, at least in her mind, better. However, all isn’t as it seems and the other world soon turns into a twisted, dark place that Coraline must escape. The main lesson in Coraline is about appreciating what you have.

Only Murders in the Building:

A show that came out recently, Only Muders in the Building is modern and exciting, but on top of that, it takes place in a building named “The Arconia” located in New York City. The vibe is immaculate and very fall-y, as the three main characters go around the building creating their podcast where they solve murders that take place in only the building.

Stranger Things tells the story of a group of friends (spanning all the way from middle schoolers to adults )that navigate a town filled with mysteries and supernatural events. Each season they are solving a different problem.

While the show spans over eight seasons, taking place during various times of the year (not always autumn), The Vampire Diaries captures that dark academia, fall feel. The show takes place in the fictional town of Mystic Falls, full of supernatural history. The main character, Elena, gets caught in a love triangle between two vampire brothers after her parents die in a car crash.

My personal favorite part of the show is the characters. Elena’s friends, Caroline and Bonnie, her brother Jeremy, and her love interests, Damon and Stefan. Their characters are what make the show so memorable.

Does this list even exist without this show? When you find people discussing fall on social media, this show almost always comes up. It is the perfect fall show, and while I love the shows above, nothing tops Gilmore Girls when it comes to capturing that autumn vibe. Set in the fictional town of Stars Hollow, which seems to be almost always stuck in the fall, the story follows the mother-and-daughter duo of Lorelai and Rory as they navigate love, life, mistakes, and more (over many cups of coffee and hot cocoa, of course).

This book is the aforementioned film “Knives Out” if it was a novel, but it is, in my personal opinion, even better. The story is all dark academia, telling the story of an intelligent girl who inherits billions from a man who just passed, even though she has no idea who he is. The catch is that she has to move into the deceased’s home, living with his many sons (or heirs, who are shocked that they aren’t receiving their father’s fortune) as they navigate deadly stakes, family secrets, and a slew of never-ending riddles.

Taking place in France in the fifteenth century during the witch trials, this novel tells the story of a strong young woman, Lou, as she navigates constant persecution as a witch. She eventually lands herself in an arranged marriage with a witch hunter. Even though the story takes place in winter, the clothing, the “France in the 1400’s” vibe, the hot chocolate, and the pastries make it all very autumnal and it emanates dark academia.

Beautifully descriptive, this book is literally a book about books, but not in the way you’d expect. The story is fantasy, where characters are able to step into different books and stories. The story is lush and it feels like you’re standing outside on a chilly fall night in a cozy sweater, staring up at the stars.

This book is pure fall and dark academia at its core. Full stop. It is about a girl, Alex, who had a fairly devastating life. Having dropped out of school early, experienced shady drug dealer boyfriends, and dead-end jobs, this is clear. She ends up being the only survivor of a homicide and on her hospital bed, is offered an out-of-the-blue opportunity to go to Yale University, as long as she does research on its secret societies. But as she uncovers secrets, she realizes that things run much deeper than she expected.

The Invisible Life of Addie LaRue:

This book takes place partly in the south of France in the 17 and 1800s and in modern-day New York City. It the artsy vibe of New York City and the lush countryside of Southern France perfectly. When you open this book, you want to transport straight to the world — running through the French hills or visiting the museums in New York, an aspiring artist yourself. Safe to say, this author knows what dark academia is.

The story is about a young girl named Addie, who, in a desperate situation, makes a bargain, making it so that she can live forever, but everyone she meets will forget her. Her story pans across centuries as she tries to learn her purpose and leave her mark in a world that will never remember her. But what happens when she stumbles upon a young man who remembers her name?

Dark academia? Check. Fall? Check. This book is AMAZING and, on top of that, it truly is peak autumn and fall academia. This book is all plaid jackets and red, yellow, and orange leaves. The story itself is also wonderful. This is a story about a group of misfits taken under the wing of their professor in an elite New England college. But, as the synopsis says, “when they go beyond the boundaries of normal morality they slip gradually from obsession to corruption and betrayal, and at last—inexorably—into evil.”

If We Were Villians:

Okay, I am not biased, I swear, but this book may just be my favorite on this entire list, in content, vibes, and just every. single. aspect. of. it. Read this book right now. I am entirely incapable of doing this book justice, so here is its official synopsis: “Oliver Marks has just served ten years in jail – for a murder he may or may not have committed. On the day he’s released, he’s greeted by the man who put him in prison. Detective Colborne is retiring, but before he does, he wants to know what really happened a decade ago.

As one of seven young actors studying Shakespeare at an elite arts college, Oliver and his friends play the same roles onstage and off: hero, villain, tyrant, temptress, ingenue, extra.

But when the casting changes, and the secondary characters usurp the stars, the plays spill dangerously over into life, and one of them is found dead. The rest face their greatest acting challenge yet: convincing the police, and themselves, that they are blameless.”

Doesn’t that sound amazing? Read this. Read it right now.

If dark academia piques you interest this time of year, check out this article!

The Origin of HeLa Cells: Women in Science