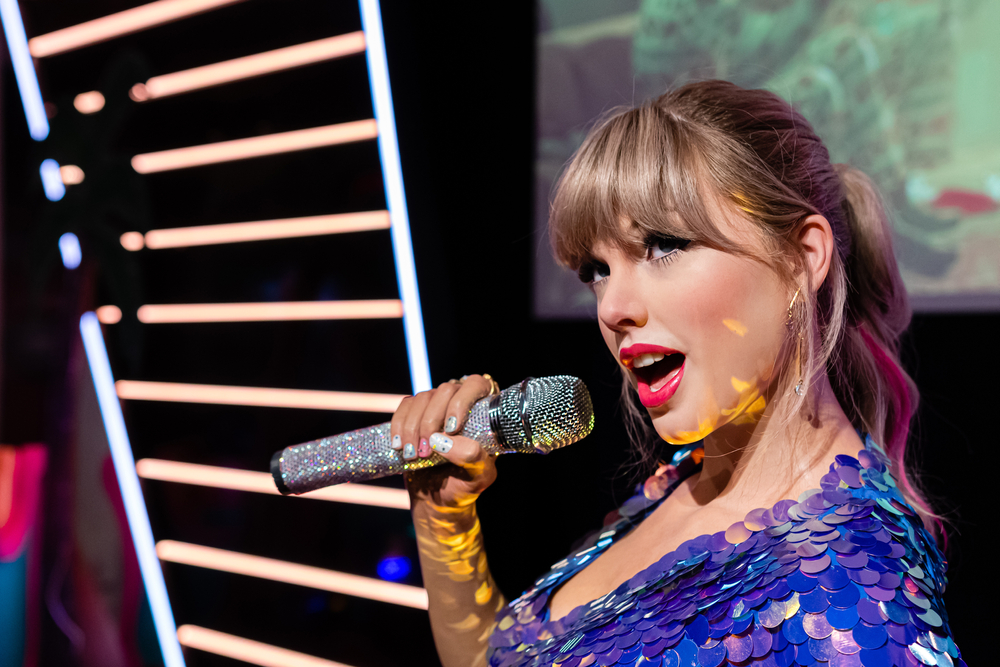 Taylor Swift on her Lover tour from Shutterstock

I have been an ardent Swiftie for almost three years, and when I say ardent, I mean ardent. Just about all of my playlists are stuffed to the brim with Taylor Swift songs. My Instagram Explore page is decorated with labyrinths of fan theories about her next release. Not only do I love what she creates, but I also admire who she is as a person. She uses her platform to inspire girls like myself to own who we are and not to let anyone look down on us. Because of her advocacy for female empowerment, Taylor Swift is the perfect person to celebrate in the movement for gender equality.

Taylor Swift rules my playlists for a reason.

From listening to “I Knew You Were Trouble” in the car with friends, to watching the “Blank Space” music video on YouTube, Taylor Swift’s music has always been in my life. As I’ve grown up, I’ve come to associate certain albums and songs with certain periods of my life—thus, her creations evoke nostalgia within me. They allow me to conjure up the carefree, tween feeling of spending the night with friends of a past age.

While I’ve always enjoyed her music, I never truly respected her artistic talent when it comes to crafting lyrics and composing an album. That is, until the release of Lover. This album initiated me into Swifthood, and I haven’t looked back since. I started paying attention to the lyrical genius of her songs and to the attention to detail invested in her music videos. I was also thrown into her world of Easter eggs. For those who aren’t intense fans, Swift loves to drop hints for upcoming songs, music videos, and albums in her work. As someone who revels in brain games and figurative language, this habit of Swift’s makes me love her music all the more.

What I love most about Taylor Swift is that she’s real. In recent years, she’s begun letting the walls down in a myriad of ways. She creates the music she’s passionate about, as demonstrated by her dramatic switch from the upbeat pop of Lover to the melancholy alternative of folklore in less than a year. Not only is she real in a musical sense, but she also is open about her beliefs. She uses her art form to advocate for the causes she supports, such as LGBTQ rights and gender equality. She’s not blinded by fame. She’s real, she’s open, and she truly cares for her fans. And that makes me extremely proud to be a Swiftie.

Taylor Swift is the music industry.

It’s no secret that Swift has been on a creative high recently. In a little over a year, she released three albums (Lover, folklore, and evermore) and two films (Miss Americana and folklore: the long pond studio sessions). Not to mention, two of those albums and one of those films made their debut in the thick of quarantine back in 2020. She is a musical powerhouse. But, don’t just take it from me, take it from the loads of awards she’s received over the years. Here are just a few.

Just to note, Swift holds the record for the highest number of Artist of the Year awards. She also is the only female soloist to win Album of the Year three times for solo recordings.

Taylor Swift is an advocate for women everywhere.

Swift isn’t afraid to speak out about gender inequality, with the most notorious example regarding her conflict with Scooter Braun and Scott Borchetta of Big Machine Records. When Braun bought Big Machine Records, Swift lost the rights to the master recordings of her first six albums. In response, Swift left the label, but Braun and Borchetta barred her from performing her past music. To regain ownership of her work, Swift announced that she will be rerecording all albums lost to Big Machine Records.

So far, she has released Fearless (Taylor’s Version) and Red (Taylor’s Version). Swift used this unfortunate situation to educate her followers about the skewed power structure in today’s society that allows men to take advantage of women’s successes.

It doesn’t stop at re-recording past songs.

Furthermore, one of the songs on Lover, “The Man,” references the conflict. In the song, Swift sings about how men hold the power in today’s major industries, forcing women to work twice as hard to accomplish the same feats that men have handed to them. This message is carried even farther in the music video for the song, which I highly encourage you to watch.

The video follows a businessman throughout his day as he lives a wastefully opulent lifestyle and abuses his power. Those around him celebrate his prideful greed; however, if a woman were to do the same things, society would condemn her. This is a spoiler, but at the end of the video, it is revealed that Swift herself was disguised as the man. Thus, she proves that women can do the same things that men can do, calling on society to stop differentiating between the actions of males and females.

You can watch the music video for “The Man” here.

Finally, upon receiving Billboard’s Woman of the Decade award, Swift gave a powerful speech centering around the struggles of being a woman in the music industry. It is both revealing and inspiring, so I urge you to give it a listen.

Evidently, Swift not only produces great music, but she also empowers women around the globe. She uses her talents to promote causes she believes in, which is a skill we all can practice in our daily lives. I encourage you to find creative ways to educate those around you on the gender inequality so deeply embedded in today’s world and find ways that it can be remedied. While you’re at it, go press play on a Taylor Swift album—you’ll be glad you did!

Take this GirlSpring quiz to find out which Taylor Swift album you are!

How to Ace Your Next Group Project

This Is Just to Say Parody: The College Application Process