School Lunch is Not Meeting its Goal 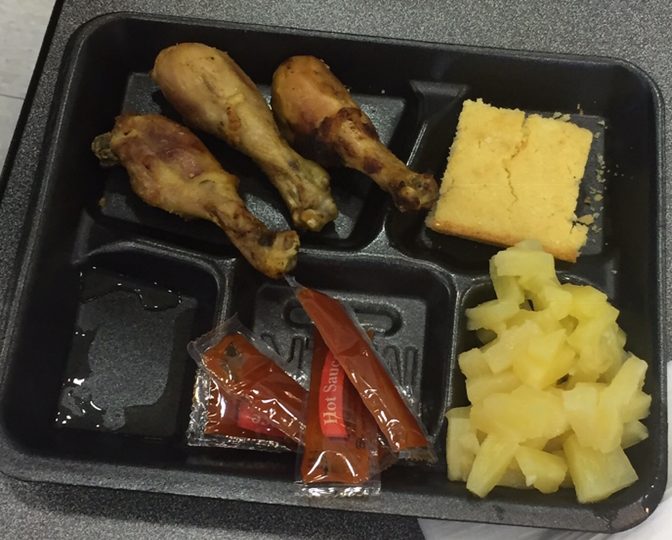 Are you a parent who constantly hears your child speak about hunger after school? Throughout America, students are complaining about not being provided enough food for lunch. The Federal Nutrition Standards of the USDA in school nutrition needs to change. The portion size of school meals needs to be increased.

All throughout school we are told that cafeteria food is meant to be healthy and nutritious.Although that may be true, the portion size is simply not enough for students. In 2012, a radio interview was held with Jessica Donze Black, director of Kids’ Safe and Healthful Foods Project, Pew Charitable and she says “The United States Department of Agriculture updated the standards for school lunches. In fact most of the standards people are really supportive of. It’s more fruits, more vegetables, more whole grains, low-fat, no-fat dairy, the things we know kids need more of. The standards are intended to meet one-third of the needs of the average child”(Black). With this in mind, I understand that the USDA want students to be healthier, but students are constantly hungry after eating a school lunch after a few hours. Also if the standards are only intended to meet one-third of students,then the majority is not being affected.This defeats the purpose of the Standards.

In addition,parents are beginning to realize that their kids are not receiving enough food from school meals.Further on in the radio show, a parent argues back and she claims that her children have been commenting that they are very hungry and that they have noticed that they can’t eat as much at school.She’s had to actually supplement their food with a snack. She sends them a snack every morning so they can eat and not be starving when they get home.This reveals that health is no longer the issue with school food.The issue is the amount of food students are recieveing.As a student, I can see that the food is healthier,but on the downside it is lighter,and it no longer fills up the majority of students.

Furthermore,the portion size of school lunches has been changed to reduce childhood obesity. This goal is being accomplished, but children are complaining more about being hungry. In Maury Thompson’s article: School Lunch Regulations Still Leaving Students Hungry. Thompson says “The new lunch standards are part of a U.S. Department of Agriculture effort to reduce obesity. In these new standards restrictions have been applied. One example for this situation would be that some cafeterias used to serve 1 and a half grilled cheese sandwiches with a total of two ounces of cheese. Now students receive one sandwich containing 4 ounces .showing an increase of protein but decrease of bread. Critics say these restrictions are too drastic and leave students hungry.

In addition, students whose stomachs are full or nearly full in class, improve in academic performance. In school when a student is hungry they tend to focus on thinking about food. Scientists have observed that food affects the brain’s function. If a child is hungry, it is harder for them to do their best work. If the USDA provide students with larger amounts of food,it would throw out the distraction of hunger in students. We have all been in class at a point in time trying to learn, but then our stomachs growl and we shift our thoughts to food, or simply become unconcerned about the lesson. The worst part about this is students are complaining that the hunger occurs after they have just eaten cafeteria  lunch.

In the same way that academics are being lessened, so are athletics. The decrease of portion sizes are hurting our student athletes. Nearly 8 million high school students are athletes. At the beginning of the 21st century the public health community discovered and explained that being overweight and obese is a problem in the nation’s youth. In 2015, an article Are School Lunches Starving Student Athletes was published on beyondchron.org, a site that provides coverage of ignored activities happening in the country. In this article Donna Woldow speaks about the issue of student athletes not being provided with enough to eat. She says that “school lunches are failing to meet student athletes’ nutritional needs” (Woldow). With that being said we learn that student athletes are being ignored, and the players are beginning to realize that very few are concerned about their situation.

Ultimately, the USDA must increase the portion sizes given in school meals. After eating lunch students should no longer have the complaint of hunger, but as stated the complaint has risen.The USDA has done a great job of lowering childhood obesity rates, but has created the issue of in-school hunger. Students need to eat a satisfying portion of food because it creates successful students. Teachers, and parents it is your turn now. Students all over America have attempted to be heard, but they are being ignored. Stand up for your students get the USDA to change the school meal standards.The positive result of this change will limit the complaints of students being hungry.

Quiz: How Well do you Know Greta Thunberg?