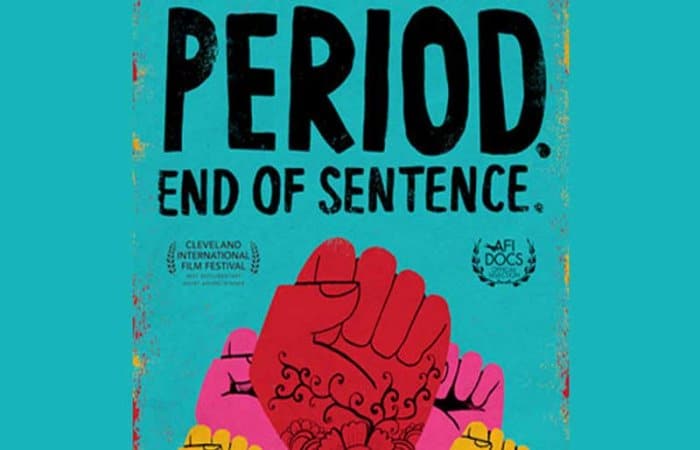 A Review of the Netflix Original Documentary by Suneeti Chambers

As I was browsing Netflix one day, I saw the preview of a documentary called Period. End of Sentence.

Since I have a passion and an interest in women’s health, I felt that this was a documentary I would learn a lot from and enjoy.

After watching it, I discovered that I was right!

The documentary takes place in India and talks about a significant topic that is considered ‘taboo’ in India: menstruation.

As you watch the documentary, you can see the awkwardness and uncomfortableness that the women and girls show when asked about the topic of menstruation. You can immediately tell how little attention this health topic is given, despite its extreme importance. Even men are asked about periods and menstruation, and they express a lack of knowledge concerning the subject.

Furthermore, many women India resort to unhygienic ways to take care of their period, as seen in the documentary.

To combat this problem, an Indian man by the name of Arunachalam Muruganantham has created a machine which creates pads. It is a relatively simple machine but it is able to create pads that are abundant in quality and quantity. Then, he got people to teach women from certain villages how to work the machines and create their own pads.

From there on, the documentary shows women with an entrepreneurial spirit, selling their own pads and getting their own money. The pride and happiness seen in these women’s faces prove that nothing can get in the way of the perseverance and power of women. The documentary has reminded me to be proud to be part Indian and to be a woman.

Most of all, it has reminded me that we should never hesitate to change the status quo!

Climate Change: Where we are, and where we’re going.