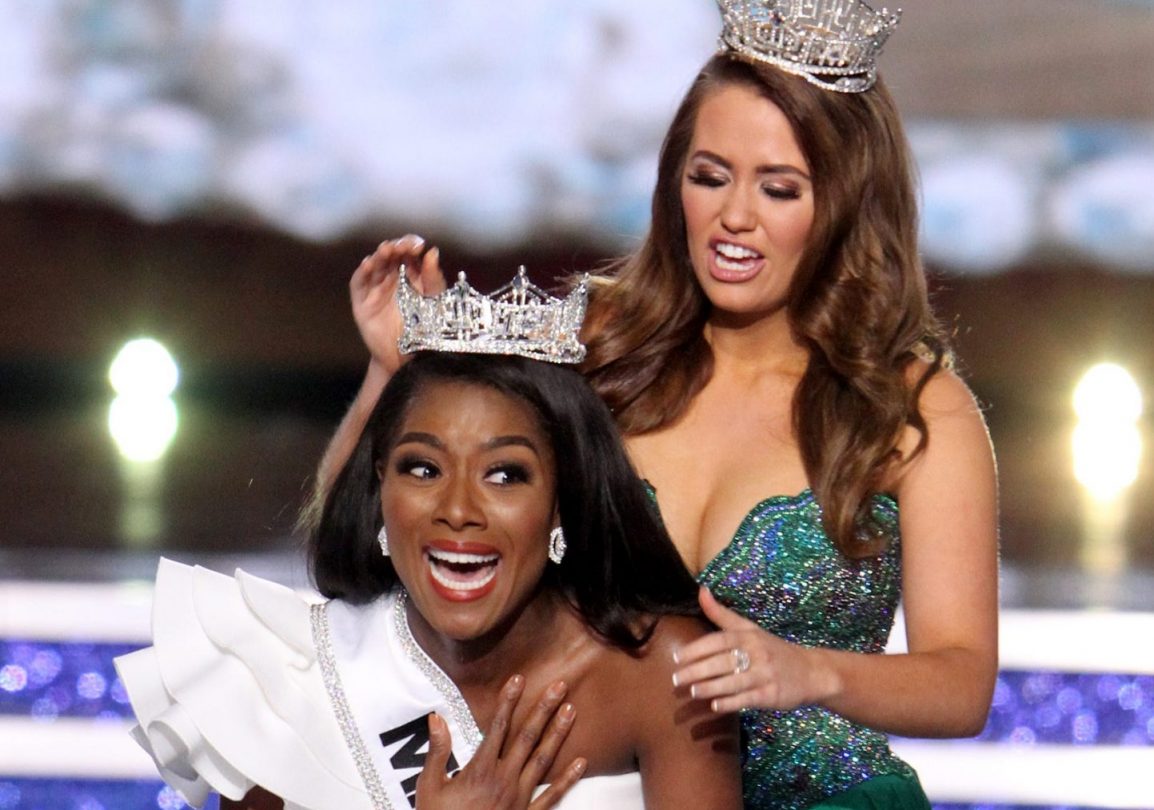 But on the night of September 1, that same skin lit up the faces of Americans all over the country. It was on this night that Nia Franklin was crowned Miss America.

A Win to Remember

Imagine a stage with lights blurred out. Imagine a girl with a crown on her head. She is wearing a green, strapless ballgown dress. She has a crown on her head but is placing another crown on top of another girl’s head. This girl is wearing a beautiful, elegant, white, one-shoulder dress. Her earrings dangle from her ears, and her face is full of excitement. She is wearing a sash that says America at the bottom of it. Her skin is so smooth and dark and beautiful. You can’t see much of her hair, but the part you do see of it is straight. Her eyes are turned away from the camera, and her hands are placed on her chest, emphasizing her amazement. You are unsure of exactly what is going on, but you know this image represents something positive.

This photo to me represents all of the accomplishments of African American women that go unacknowledged. When someone looks at this photo they will probably get the idea that they are looking at the crowning of a pageant winner, which is only something that can be observed from the surface level. As I have had time to research and study this photo extensively, I have no other reason to believe that this is a crown for all women of color. Women have always been given the short end of the stick, whether it be in voting, the workplace, or when it comes to their ideas being heard. The Miss America pageant highlights hard-working women, and through Nia Franklin being crowned, hard-working women of color were honored.

Who is Nia Franklin?

Nia Franklin is a normal girl who has made extraordinary impacts. Nia Franklin competed in the 2019 Miss America pageant on September 1, 2018. This competition itself was historic because it was the first Miss America competition with no swimsuit round. The significance of this was that the competition focused less on the outside appearance of the girls, but instead focused more on each girl’s uniqueness. This was the first competition in which the sizes of all the girls varied because they did not have to fit a certain look. Nia Franklin made extraordinary impacts, not by representing the state of New York, but rather by being one of the few African Americans to ever win the crown. Nia Franklin made extraordinary impacts on this competition by using her voice. Throughout the rounds of the competition, she was asked questions, which she answered with honesty and intelligence. Nia also used her voice in a more literal way during the talent part of the competition when she sang an opera song. Her performance was clean, but it was her voice that wowed the judges. It was her voice that was soon be the voice to spark a change.

Why is this important?

In reflecting on the significance of this photo, I have to figure out why it is important to me. Seeing this photo and the Miss America pageant made me feel empowered. I have always been confident about my abilities, but sometimes what others feel about me can get in the way of me expressing my true self. Seeing Nia being herself on that stage and winning the title of Miss America opened my eyes to see that I will receive my greatest awards when I am being true to myself.

The next thing that I can take away from this photo is all of the positive light that is being shed on my race. Very rarely do you hear uplifting things about the black community. People with the same skin color as me are often associated with terms like, “uneducated,” or “thugs,” but Nia forced everyone to see my race as winners. This picture also gives me a sense of hope and a push for equality in our country.

Seeing the joy on Nia’s face can help you see some good in the country and take your mind off all the bad things happening for a few moments. I feel this shows a push towards equality because as stated this competition was not about looks but rather about how you represent your true self to the audience. This shows a push for equality by not discriminating against any person for any reason. I learned most importantly to stay true to myself and to never change for anyone.

The Perfect Playlist for Valentine’s Day